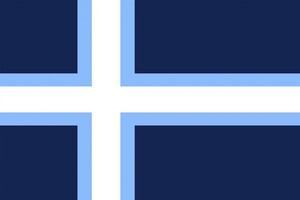 On a recent visit to Dublin, Henrik Jacobsen a Danish graphic designer and architect was quite taken with the city and particularly the Nordic origins of Dublin which date back to 841 AD.

In true Danish, style he gathered up as many books as he could and read up on Viking Dyflin.

“The Viking story of Dublin is illuminating both from a Norwegian and Danish perspective.The fact that this city was almost a proto-Venice of the Irish and North sea is something that has largely been forgotten.

One of the things that struck me, is that there is an undercurrent of Nationalism in many of the accounts of Viking Dublin. I think many Irish people narrate the story of the Vikings as ‘us’ and ‘them’, when the truth is far more complex and interesting. I was amazed to learn that a Norse dialect was still spoken in parts of Dublin up until the early 14th century.“

A lifelong vexillologist (flag lover) he set about a simple task (from a design perspective) of crafting a Nordic flag for Dublin using the city’s navy and sky blue colours.

“Every town and village in Denmark has its flag and crest. Ireland is no different in that respect, but you don’t see them, unless you attend a Gaelic football game. Indeed many of those flags are of recent origin. I personally think, Dubliners should be proud of the Norse origins of their city.

The Danish flag was formulated in 1748, the design but not the colours were copied by the Norwegians, the Swedes (typical) and the Finns etc. I can see no reason why Dubliners cannot have their own Nordic flag.

I think it looks good. Also, one has to accept that the Irish national flag is itself a knock-off of the French tricolore, so there is no need to stand on ceremony about such things”

The View From The Dart 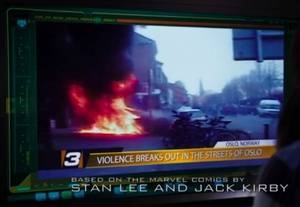 35 thoughts on “Viking Up The Dubs”