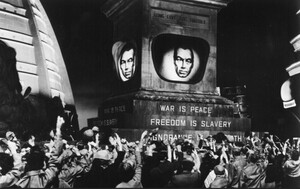 With so many of George Orwell’s predictions having come to pass, have we any hope of bringing about a more sane, more just World?

In 1948 George Orwell wrote his dystopian novel ‘1984’, the title of which was a slight re-ordering of the year when he was writing his work.

Written as a prophetic warning on the dangers of authoritarianism, I suspect he would now be saddened at how many of his fears have come to be realised. How distant the World has become detached from his cherished ideals of social democracy.

Big Brother has become very very real. An all pervasive surveillance, as revealed through the whistleblowing of Edward Snowden and Chelsea Manning, has seen the commodification of personal information to the extent that unseen, distant forces now know more about of us than we often know about ourselves.

The extent of how much information on the individual has been accumulated now means the fear that exists for many, is that it is not the direct fear of exposure most are afraid of, but the awareness that those who have acquired this information get to decide the context in which it is set thus controlling its interpretation.

Our post factual World is sadly being being mirrored in Orwell’s concepts of Newspeak and the Ministry of Truth. Words are weapons manipulated by their authors to distort far more than to inform.

Truth has become divisible. It deliberately is being attributed as lacking in depth. This truth by its nature can never be fixed and must ever be transient. Truth in this cheapened form has become a currency.

Even when prognosticating on the geopolitical World of 1984 Orwell seemed fairly on the money. He envisioned three superpowers of Oceania, Eurasia and Eastasia. Oceania being the US and its European vassal states, with Britain designated as Airstrip One. Eurasia was Russia with its Eastern European satellites. Orwell was most impressive in predicting the superpower status of China as Eastasia, particularly as Mao Tse Tung had yet to take power there in 1948.

Among the scarier of predictions Orwell made on these superpowers was on the fluidity of their interactions with each other. Wars of convenience would be constantly fought between them with ever shifting alliances. This seems a fairly close approximation of what’s happening at the moment in Syria and in Yemen.

Of course these wars became deniable when their theatres and the alliances fighting them changed.

With so many of Orwell’s predicaions having come to pass, have we any hope of bringing about a more sane, more just World? The unquenchably hopeful idiot in me wants to get Orwell to ghost write a utopian novel pointing a better way ahead. Come in 2061 your time is now.

Help rid us of infotainment. Gives us back our real time information. Let us be able to think again on the basis of facts that are proven not supposed. Give us some truth.

If it isn’t asking too much maybe we could return to a World where knowledge is gained through reading books, rather than by watching YouTube videos.