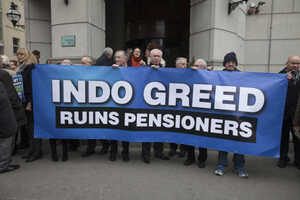 Protest outside the INM egm, Alexander Hotel, Dublin 2 on Monday

We have come to a dividend in the road.

As the Christmas approaches the Gardaí have issued a well-timed reminder to be vigilant about theft. Key times for shoplifting and bag snatching are identified as being afternoons on Thursday, Friday and Saturday.

This time of year is busy: Christmas parties, Christmas shopping general goodwill and merriment doesn’t come cheap so we do need to be careful with our possessions.

What the Gardaí did not give a warning about was pension snatching. Understandably so, because this is not illegal; morally reprehensible but not illegal. What makes it worse is the reasoning behind the theft: dividends.

These pensions are not being abused to save a flagging business, nor are they simply gone. No, instead they are being used to pay dividends. To create a payment that is unnecessary. Who the share-holders are is interesting, but irrelevant. What matters is the action they are taking.

Interestingly, Leo Varadkar has spoken to the Attorney General with regard to this but little has come of it yet. Is this Leo’s chance to ride in on his steed and save the day, just in time for Enda to retire?

But Varadkar’s heroic actions shouldn’t be needed. Why are the board members of INM allowed to steal from a pension pot that was already agreed? They don’t have to offer the defined benefit scheme to new entrants as their business model evolves, however surely there is a moral obligation to honour such a longstanding agreement.

This is an opportunity for the men and women who run our country to take a positive strong stance and actually take a strong role in helping the people they represent.

The government could finally take affirmative action against white collar crime rather than setting up toothless, costly inquiries. Now is the time for the government to show that democracy works and that the government can and will work for the majority.

I commend Leo Varadkar for taking the public step of discussing this with the Attorney General, I only hope that this is not a fruitless discussion.

10 thoughts on “Drinking Your Milkshake”