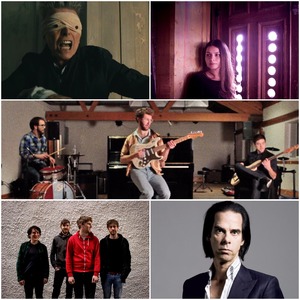 Yesterday, we asked YOU, to lay out your favourite listens from the year that’s been.

On the line was a €50 voucher (twice the usual} for Golden Discs, usable at any of its fourteen branches around the country.

It was a big year for music both major and independent, and we had some great suggestions. But there could only be one winner.

LiamZero takes the voucher with the The Dame’s surprise swansong from January.

“‘Blackstar’ by Bowie, because in just three days, it went from being the remarkable rebirth of one of popular music’s greatest careers to being the most astonishing, beautiful, witty, dignified, clever and heartbreaking farewell of them all, filled with lyrics that suddenly revealed their hidden truths. It’s a poorer world without him, but at least he gave us a fitting goodbye.”

In further finds from the running we have  two categories:

The Best thing I heard this year from this year

Starina: “The best thing I’ve heard all year was Girl Band’s Holding Hands With Jamie. Slightly deranged, with clever lyrics and deadly melodies. We should hold them up as an example of how great Irish music really can be.”

Witty Name: “The best thing I’ve heard all year was Let Me Get There by Hope Sandoval and the Warm Invention, featuring Kurt Vile. Warm, fuzzy tune, with great guitar. American singers with a great Irish band (Dirt Blue Gene, Colm O Ciosóig). Lovely album, takes your mind off all the madness of 2016.”

Kolmo: “The best thing I’ve heard all year is Deantown by Vulfpeck. Nothing on Earth has come close to being this toe-tappingly groovy. Nothing. Nada. Nix.”

Marklar: “The best thing I’ve heard all year was (Girl We Got A) Good Thing by Weezer. Full of joy and back to their best.”

The best thing I heard this from from another year:

Ouch: “Only discovered this Bowie gem when it was re-released this year on the Who Can I Be Now box set that covered his phenomenal 1974 – 1976 period. Amazing tune and it didn’t even make the cut to be released at the time…”

Wilson-IRL: “The best thing I’ve heard all year was Farewell Sarajevo by Maybeshewill from the album I Was Here For A Moment, Then I Was Gone. The album is a couple of years old but i first heard it this year and it’s the first album that I’ve repeatedly listened to, in its entirety, in over a decade.” (Recommended – Mike)

Niallo: “The best thing I’ve heard all year was Superstition by Stevie Wonder… No, no, wait! Come back… on 10+ grand’s worth of hi-fi gear at the listening room on Wicklow Street, blew me bleedin’ socks off, you can hear the placement of each of the instruments as if you were in the studio, ’twas unreal.”

Zena: “The best thing I’ve heard all year was, Cherokee Morning Song by Walela. It was released before 2016 but it’s one hell of a song, it’s sang in Native American too, simply beautiful.”

And So To Shred

You May Have Liked This

5 thoughts on “The Songs That Made Your Year”