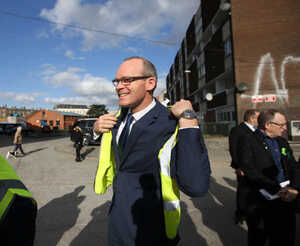 Instead of his well-intentioned, but ultimately stop-gap, package of measures Minister Simon Coveney should have been looking to more bold and creative ideas

Just a few weeks ago Simon Coveney’s Fine Gael leadership ambitions seemed forlorn. His media appearances were infrequent. When he was on TV or Radio it was to answer for the government’s two big policy failures: water charges and housing.

Meanwhile his principle rival, Leo Varadkar, was Whatsapp-ing Fine Gael parliamentary colleagues, doing the constituency chicken and chips circuit and popping into radio and TV studios dispensing bonhomie and political insights on every issue under the sun, providing it had nothing to do with his departmental responsibilities.

According to the pundits in the Sunday newspapers all this has changed. Thanks to the launch of his rental strategy Simon has, with one mighty bound, now leaped ahead of Leo in the leadership stakes.

They say that Simon’s new policy is a winner as he managed to keep most of it intact and didn’t have to surrender too much to Fianna Fáil, apart from back-tracking on his earlier rejection of rent controls and only taking on ten out of the original twelve proposals it had made over the Summer.

So, is this really how we evaluate policies these days – by how they affect your personal political ambitions?

How about we do something bold and brave and judge them by doing something mad or crazy like seeing how effective they are and how they address the problem they were designed to solve?

I do not doubt Simon’s sincerity in trying to tackle the crises facing him. He has demonstrated great political courage in taking on not one; but two of the biggest political challenged facing this government. While I do not doubt his commitment, I do seriously question his boldness and imagination.

As with so many political and policy issues in Ireland, Minister Coveney appears to be tackling this one from the wrong end. The biggest problem we face in housing and accommodation is supply – attempting to tackle the housing problem without doing something serious about supply is the equivalent of tackling global warming by turning down the brightness setting on your iPhone. It doesn’t hurt, but it doesn’t really help either. It just gives you something nice to post on Facebook.

But the supply of good quality rental accommodation is not keeping pace with that increase nor with the specific demands of that group. According to Eurostat figures (2015) the percentage of our population living in apartments/flats, at just over 5%, is one of the lowest rates in the EU. The percentage in the UK is 11% and the average across the EU is 25%

Yet, though it serves the needs of an increasing percentage of the population Ireland’s rental sector is deeply dysfunctional.

It is not designed nor structured. It is something that has developed and emerged in an ad hoc manner and has now reached the point where it doesn’t work for either renters or landlords. This is a rare achievement. It is also entirely unnecessary, as there are a range of rental models from which we can pick and choose.

The market has not created or evolved a stable and sustainable model of rental accommodation over the past decade and a half because the market itself has not been stable over that period. It has lurched from boom to bust and given us a rental sector with all the hallmarks of both.

Mention rental accommodation and many politicians immediately think of students and young people. It doesn’t appear to have occurred to them that using rented accommodation could be a reasonable first choice for large swathes of people and not some mere fall back or stop gap for those who cannot afford to buy.

About 12 years ago, I was an adviser to the main representative body for rental property providers. Back then one of their key issues was the lack of professionalism in the sector, and the same remains true today.

We have a class of accidental landlords, many of whom have just one, two or three properties and who juggle managing those rental properties with other businesses.

We should be encouraging the provision of good quality rental accommodation as a service business. It should be run to professional standards and attract both the supports and regulations that would apply to any other important service industry such as accredited training programmes, inspections and tax reliefs.

Instead of his well-intentioned, but ultimately stop-gap, package of measures Minister Coveney should have been looking to more bold and creative ideas such as long term leases, German style rent caps, incentives for institutional investment in the rental sector and higher densities, i.e. building up to 10 storeys plus, in designated areas, especially in Dublin.

He should be moving rent subsidy away from the Social Welfare code and turning it into a housing benefit payment operated by Local Authority housing officers who can monitor and inspect the scheme, not overworked and over stretched community welfare officers.

This proposal was made back in the mid 1990’s when Proinnsias de Rossa was the Welfare Minister, maybe Simon can persuade Leo to hand responsibility for this scheme over to him?

While he is at it, Simon also needs to show the leadership he hopes someday to achieve and stand up to the Department of Finance.

15 thoughts on “A Solution Without Vision”