Further to last Thursday’s occupation of Apollo House on Tara Street, Dublin 2 – a Nama property – in order to provide accommodation for rough sleepers…

Last Thursday we saw an example of civil disobedience in the form of the seizure of Apollo House in Dublin’s inner city. However, we saw something more. We saw concrete actions, built on top of the tireless work of homeless charities day-in day-out across the country, to provide help and accommodation to the city’s homeless.

Most importantly, we saw how easy it is to provide a short to medium-term solution to this problem.

We have seen an overwhelming support for this action, as well as cautious moves against it. Most striking of all is the claim from the Department of Housing that there are sufficient numbers of emergency beds for those sleeping rough.

This claim simply does not stand up to scrutiny. Perhaps ten years ago, before the housing crisis, it could be claimed that those sleeping rough were ‘choosing to do so.’ However, the growing numbers of people sleeping rough on the streets of Dublin, estimated between 100 and 300 every night, put lie to this idea.

The homelessness and housing crisis is multi-faceted and needs an appropriately detailed and well thought-out response. As such, the Housing Action Plan introduced by Minister Coveney should absolutely be welcomed – in the long-run there is one answer and one answer only to solve this issue; we need more social housing.

But what about the short term?

Home Sweet Home have themselves claimed they are seeking to save lives via their illegal occupation of Apollo House. This claim is far more based in reality than the claims of the Department of Housing with relation to emergency beds. This is a short-term action – and it is one that the Government could replicate easily, swiftly, safely, and cheaply.

As The Irish Times reported on Saturday, 9% of Dublin dwellings lie empty this Christmas. Arguments that these are not ‘fit for purpose’ or that outfitting them to house families in the short term is too expensive or impossible have been utterly turned on their head.

Mazars have rightfully and legally claimed that this occupation is illegal, and I would expect it was a tough but understandable morning’s work in their solicitors’ offices in issuing a request to vacate the building.

The law probably cannot permit Apollo House to remain occupied. However, there are a slew of alternative buildings open for the Government to redirect the energy and resources of this movement towards, to provide the kind of accommodation being sought. If they don’t create an alternative option which is equally as viable as that produced by Home Sweet Home they should be ashamed of both their ineptitude and callousness.

If nothing else, they should provide an alternative to save some face. A group of socially conscious poets, artists, activists, and community leaders last week seized a building in Dublin’s city centre in a stand against inequality, poverty, and what they see as an out-of-touch elite.

Does our government really want to be seen to stand by as these activists are turfed out of this occupied building? It’s been about 100 years since we have seen something strikingly similar happen.

Make a plan, fulfil that plan, house the homeless. If they cannot do what a bunch of artists and volunteers have managed to do then perhaps they should really question their purpose to the Irish people.

Apollo House – a vacant NAMA building now being ran as a residental unit for and by the homeless – was taken over by Home Sweet Home Eire Irish Housing Network Thursday night. It has been in the hearts and minds of people since. More then 1,500 people have applied to volunteer.

[Tomorrow] night the Outreach Team will host a public meeting in the Teachers’ Club [36, Parnell Square West, Dublin 1] at 7.30pm, [entitled] ‘Apollo House how can you volunteer and support?’

Along with our continued replies to calls, emails and messages this is the place to be if you want to volunteer and support the campaign.

‘Apollo House how can you Volunteer and Support?’ meeting (Home Sweet Home) 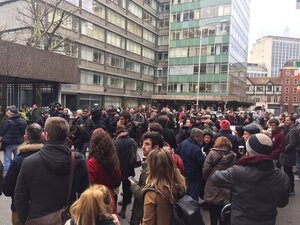