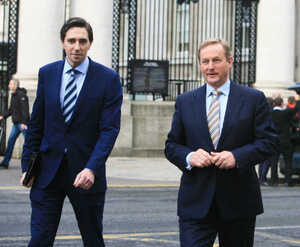 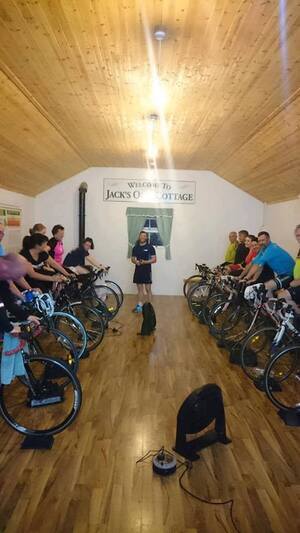 Then they start spinning…

In November, there was some uproar about a Mayo cycling club (Islandeady Cycling Club) receiving Lotto funding from the health fund by Health Minister Simon Harris.

Uproar being that it was associated with Enda Kenny and it’s unusual for such clubs to get funding from this fund, especially anything close to €20,000.

The club denied Kenny had any hand in this, but it is not so and no Irish media, apart from The Sunday Times (see below), are reporting it.

I’ll include the text of the article in full as it’s behind a partial paywall.

Enda Kenny, the taoiseach, made two representations to Simon Harris, the health minister, on behalf of a cycling club in the Mayo village where he grew up that was seeking lottery funding from the Department of Health last year.

Islandeady Cycling Club was subsequently awarded €20,000 in funding, despite the department’s lottery fund being ring-fenced for the “provision of health-related services”.

Pádraic Horkan, the club’s public relations officer, has previously said the taoiseach had “no hand, act or part” in the funding application and had not been consulted about it.

This weekend Ger Deere, the taoiseach’s assistant and a member of the club, said he had brought the application to Kenny’s attention.

The club, which has more than 100 members, sought funding for 30 indoor exercise bicycles and 30 mats to help it provide spinning classes.

Correspondence released under the Freedom of Information Act (FoI) shows Kenny wrote to Harris on behalf of Islandeady Cycling Club, of which he is an honorary member, on May 19 enclosing the club’s application for lottery funding and asking to be kept appraised of its application.

“I would appreciate if you may evaluate the contents and advise me on the matter,” he wrote. Harris responded saying the club’s funding application was “receiving attention”.

On July 5, Kenny wrote again to Harris on behalf of the club “seeking an update on their application”. On July 8, an official in the department assessed the cycling club’s application for funding and advised that it met the criteria laid down by the department for lottery funding.

“The application is for capital funding and aims to increase physical activity across the wider community,” she noted.

At a reception to mark the taoiseach’s honorary membership of the club in December 2015, Kenny promised to join in one of the club’s weekly “cycling spins”. Last August, Kenny, who takes part in a charity cycle around the Ring of Kerry every year, launched a fundraising event at the club.

Each year hundreds of organisations apply for lottery funding from the Department of Health. Last year 120 organisations received €2.7million in grants.

The department defended its grant to Islandeady, saying “being physically active is one of the most significant improvements people and communities can make to improve physical and mental health”.

My own research on this last month showed that, going back to 2009, there have only been about a dozen sports groups/clubs which have seemingly had a grant from this health fund.

However, most of these also have a broader scope than being just a sports club, and provide outreach facilities for people with physical and mental disabilities and illnesses.

Islandeady Cycling Club does not. It wants 30 high-end turbo trainers.

The club’s president is Joe Moylette. His son is former boxing champing and gym owner Ray Moylette. Ray will be using these turbo trainers to deliver spinning classes to the club. Presumably for a fee.

It stinks, and from the very top heads should roll.

The Luckiest Family In Mayo

‘A Referendum To Repeal The 8th Wouldn’t Pass’

46 thoughts on “The Cycle Of Irish Life”