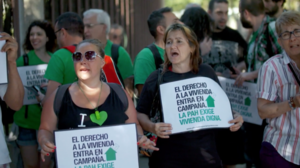 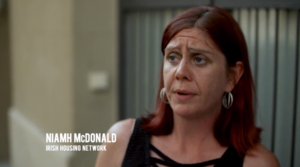 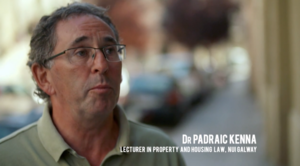 For the documentary, Mr Kehoe travelled to both the US and Spain to see how the same vulture funds operate there.

PAH is a grassroots organisation that is campaigning for housing rights and attempting to prevent evictions by occupying homes that are in the process of being repossessed.

Mr Kehoe reported that PAH has prevented thousands of evictions.

As he sat in on one meeting, Mr Kehoe realised 14 Irish people were there, including Niamh McDonald, of the Irish Housing Network, who has also been involved in the recent Home Sweet Home campaign, and Dr Padraic Kenna, a lecturer in property and housing law at NUI Galway.

“People, in fact, are leading the politicians with the solutions here [in Spain]. For instance, they have a law where a family or the administration can buy a property at the same price as a vulture fund. Now that’s something that we could seriously consider.”

Members of the audience also contributed, including James Treacy, the chief executive of Stubbs Gazette. 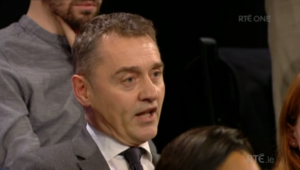 “I was very surprised that, in 2016,  there were actually only 4 registered judgements awarded in favour of the vulture funds. Now, at Stubbs Gazette, we believe that that figure is going to explode in the next 12 months and there’s a number of reasons for that.”

“The first reason would be that I think that there’s currently about 250 cases currently with the courts that have not been adjudicated on so a significant proportion of those will end up with judgements and secondly, and more importantly, is that the Central Bank have brought out figures that show that 38% of all of the mortgages that are owned by the regulated bodies are over 720 days are in arrears.”

“Now, depending on who you believe, or what you read, there are between 45,000 and 90,000 mortgages that are currently owned by the [vulture] funds. So, whichever way you look at it, there are tens of thousands of these mortgages in serious arrears.”