A new banner on Apollo House this morning.

Further to eight residents returning to Apollo House yesterday because the accommodation offered to them by Dublin City Council was unsuitable to their needs.

“At 10.30am this morning, the Home Sweet Home legal team are going into the High Court to seek an extension to the stay placed by Judge Gilligan on his order to vacate Apollo House on January 11. The stay is due to expire today, January 11, at midday.

“Despite great efforts by the Home Sweet Home collective and, despite assurances given by Minister [for Housing] Simon Coveney at recent negotiations, it has not been possible to secure adequate alternative accommodation catering for the short and long-term needs of the residents of Apollo House.

“It is imperative therefore to seek an extension to the stay until safe and adequate alternative accommodation is secured for the residents of Apollo House.

“It may be necessary as part of the application to Judge Gilligan to join Minister Coveney to the proceedings.

“Apollo House and Home Sweet Home campaigners are calling on public support to join them outside Apollo House from 11am today, Wednesday, January 11, as they defend the gains of this campaign and the basic right to a home.”

Campaigners are to hold a demonstration at 11am today outside Apollo House. They’re already practicing their songs pic.twitter.com/wbjhlEKGnE

Previously: ‘Home Sweet Home Will Only Leave When Residents’ Needs Are Met’ 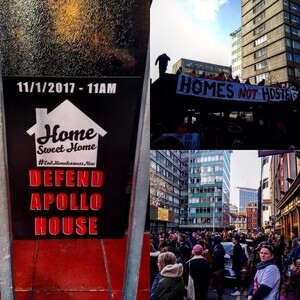 hi ct judge says he won’t get into argument about suitability of alt accommodation for #apollohouse residents, adjourns case until 12