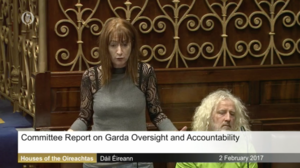 You may recall a post from last week concerning Garda whistleblower Keith Harrison.

Last October, during a meeting of the committee on justice and equality, Independents 4 Change TD Clare Daly repeatedly asked Ms O’Sullivan if she was privy to any information about allegations of mistreatment of Garda whistleblowers and Ms O’Sullivan repeatedly replied:

Ms Daly was speaking during a debate on a report on Garda oversight and accountability compiled by the Joint Oireachtas Committee on Justice and Equality.

“This report is not just aspirational, containing ideas we have circulated for the craic; these are serious observations, made in part on the basis of the engagement we had with the oversight bodies and the Commissioner and her team and in part from our experience over recent times. In that context, I welcome the fact that the Minister will take on board some of the committee’s recommendations.

“That is a very welcome development. Without in any way being churlish, I believe it is an awful pity some of the recommendations were not taken on board previously.

“It is a matter of record that many of the recommendations contained in the report and the Minister’s Bill were made by us a number of years ago during the debate on the first GSOC and Policing Authority Bills. I am not saying this to score points, but people have suffered as a result of some of these provisions not being available during the two years since the most recent GSOC Bill was implemented…

“…We must be realistic about why the concept of oversight has gained popular currency and is being talked about by the dogs on the street. There is just one reason, that being, the heroic stance of a number of Garda whistleblowers who shed a light on an insular blue wall of silence, an organisation in which, contrary to what the Commissioner says, dissent was deemed to be disloyalty and punished accordingly. The order of the day was rats, death threats and serious intimidation of people who tried to do the right thing.

“The public perception of what a whistleblower is has been stood on its head. Now, being a whistleblower is identified as a position to be lauded, and one that makes a valuable contribution to improving the situation for all gardaí and members of society. There are many good gardaí and, for some time, they have believed that the situation will change. They stepped forward accordingly to join the ranks of the whistleblowers and improve matters.

“We have engaged with ten serving members of An Garda Síochána who have made protected disclosures of one sort or another. Under a change in the previous legislation, GSOC is now the confidential recipient and the vehicle through which gardaí make complaints. That service needs to be beefed up radically because GSOC does not have the time or resources to provide it adequately. It does not have the legislative power to compel Garda co-operation that it needs.

“Many cases have stalled because of delays in the Garda handing over material that GSOC needs to conduct its investigations. This non-co-operation continues today. It can be covered up as administrative delays and so on, but it impacts on the work being done.

“A number of the whistleblower cases in question are in the public domain, but others whose cases are with GSOC – in the instance of Keith Harrison, for more than two years – have had relatively limited meaningful engagement with GSOC because of delays with documentation and so on. In Nicky Keogh’s case, the GSOC investigation has practically concluded and disciplinary recommendations have been made, but the Garda has not agreed to GSOC’s involvement.

“These serious matters are ongoing. One must ask, if the situation is improving, why all these gardaí bar one are out sick. All have made allegations about bullying and harassment since coming forward, which is in direct contrast with the public statements of the Commissioner that she does not know of any harassment.

“We know that she has been directly informed of that harassment, as has the Minister. Most recently, serious allegations were made, and were widely covered in the provincial media, during an assault case after Christmas. In open court, evidence was produced of doctored witness statements. The people involved in the assault were also involved in a case in which a garda had been accused of involvement in the drug trade and so on. Criminal prosecutions are being impacted.

“The situation cannot be right if so many people are out sick. The case of the only garda who made a protected disclosure but who is not out sick is appalling. It involves a family law case. He received information to the effect that the judge, who was a family friend of his former wife, had held a meeting before the court case and then granted a protection order against him. He then made a complaint to the Garda. Not only was his complaint not investigated, but the senior garda involved initiated criminal proceedings against him for interfering with the judicial process when the circumstances clearly did not meet the criteria.

“That person, albeit a member of the Garda, was a victim, only to be revictimised by what the senior garda did. To add insult to injury for him and a number of other Garda whistleblowers, the very man who did that was brought by the Commissioner to attend our committee’s hearings into oversight as a witness for An Garda Síochána. Confidence among serving members is not developed if this type of behaviour is happening.

“The Minister will see from the committee’s recommendations that we want the Policing Authority to have more control over the Commissioner. This is not a new idea.”

57 thoughts on “‘Why Are Nine Garda Whistleblowers Out Sick?’”