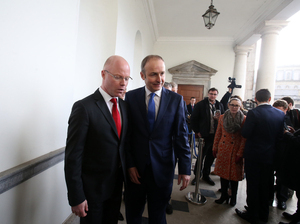 With the Stephen Donnelly ‘coup’ Fianna Fáil is not so much winning back the support of disgruntled ex-FF voters as it is convincing non-committed voters that it is the best option at the next election.

Around this time last year Martin was preparing to face his biggest political test as leader, the 2016 General election. Though we forget it now, the omens did not look so good at the time. A Sunday Times/Behaviour and Attitudes opinion poll published on this date last year had Fianna Fáil on just 20%.

This was a far from auspicious start to an election campaign where most pundits and commentators were predicting a return of the outgoing Fine Gael/Labour government, although with a considerably reduced majority.

Fianna Fáil was set to make some gains, even a repeat of its disastrous 2011 performance could see it gain a few extra seats, the question though was whether it could win enough extra seats to make itself relevant.

Just one year on and the party’s position at the centre of Irish political is now far more secure than most imagined possible. Not alone that but Michéal Martin’s grip on leadership is by far the most secure of all the current party leaders: Enda Kenny has Leo and Simon C snapping at his heels. Brendan Howlin has Alan Kelly stalking the corridors while Gerry Adams has the past.

The past year has been a good one for Martin. His media performances have been convincing and he conveys the impression of a man who is on top of his game and happy to engage in public debate.

This positive feeling towards him has been reflected in his own approval rating and in his party’s slowly increasing polling numbers. Last week’s coup in winning Stephen Donnelly TD to FF’s Dáil benches further suggests that Martin’s Fianna Fáil is on a continuing upward trajectory.

Martin’s newest TD arrived fully on message. In the face of an understandable chorus of disapproval from the pundits for his own very cutting past criticisms of Fianna Fáil, Donnelly could construct a reasonable and coherent narrative for his joining the Soldiers of Destiny, offering two main reasons:

First, that he saw a party “going back to its social democratic roots, emphasising a stable tax base, support for business, investment in public services and communities, and a shared prosperity” and Second, that he has witnessed the party working hard over the past six years to move on.

There is, of course, a third reason: the fact that he sees Fianna Fáil as the party most likely to form the next government and Martin as a future Taoiseach.

Donnelly may be right, but Fianna Fáil still has a big test to face before these things become certain – and it seems that Martin see Donnelly as a key player in facing that test.

The decline in Fianna Fail’s support started long before 2011 or even 2009, it started at the end of the 90s as the Irish electorate started to change.

Fianna Fáil’s wins in 2002 and 2007 were not about Fianna Fáil simply rallying its voters out to back Bertie and back the party, they were about the increasing number of non-committed, non-party affiliated voters backing the party they saw as being the most economically competent.

This is why the fall in support in 2011 was so great – the decline in core support that had started in the 90s had been masked by an increase in we might term “promiscuous” support.

Fianna Fáil is not so much winning back the support of disgruntled ex FF voters as it is convincing non-committed voters that it is the best option at the next election.

There are some committed core supporters, as evidenced by 2011, but this traditional loyal pool of voters has been falling and it continues to fall. Fianna Fáil is not unique in this, it is happening everywhere and it a phenomenon that you cannot simply address with smarter graphics, bigger and better campaigns and stronger local organisation. Fine Gael is in the process of discovering this.

Post-election surveys, including the 2016 one, suggest that Fianna Fáil support is lower in the sections of society that are growing, i.e. younger voters and those with higher education.

This is a problem that the party needs to address now. It has succeeded to win back some support from older voters and some of its more traditional base, but to what extent did it actually win back that support as opposed to merely reaping the rewards of Fine Gael losing it?

Are Fine Gael and Fianna Fáil – and perhaps the remnants of the Irish Labour party – caught in a political zero sum gain, where one party can only gain when the other party[s] lose?

I suspect the situation is not quite as dark as this and the combined support of the three parties has the capacity to grow and get back into the mid/high 60s, but it can only do so when we return to some sense of stability and faith in political and politicians begins to grow. This does not presume, however, that all three parties will continue – the lesson of the past decade is that there are no certainties.

In the meantime, Martin’s own immediate destiny is dependent on reaching out to educated voters and new voters and convincing them that Fianna Fáil capable of successfully managing the economy.

The addition of Stephen Donnelly and his positioning by Fianna Fáil over the past few days suggests that Martin gets it.

Earlier: For Your Consideration: The Day Stephen Donnelly Joined Foster and Allen 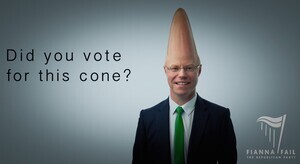 32 thoughts on “Stephen And The Promiscuous Voter”