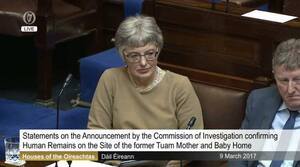 Before deputies made statements about the confirmation last week that human remains have been found at the site of the former mother and baby home, run by the Bon Secours order, in Tuam, Co Galway.

The Minister for Children Katherine Zappone told the Dáil that, by the end of the months, she will publish an interim report that the Commission of Investigation into Mother and Baby Homes gave her last September.

She also said a scoping exercise will be carried out to examine calls for an expansion of the commission’s terms of reference “to cover all institutions, agencies and individuals that were involved with Ireland’s unmarried mothers and their children.”

Experience tells us it can take time to shine a light on dark periods of our history. The truth is hidden. Sometimes hidden in plain sight.

It takes the brave testimony of survivors, long studies by historians and the dogged determination of investigative journalists to bring a spotlight to events which were previously only whispered about – in this case for generations.

It is now almost a week since the Commission of Investigation into Mother and Baby Homes confirmed what we had all feared.

Today I wish to place on the record of this House the Commission’s update that significant number of human remains are buried in the site of the old Mother and Baby Home in Tuam.

For survivors, loved ones and campaigners such as the tireless Catherine Corless it was a moment of vindication. After decades and years of hard work, determination and unwavering commitment the truth has been laid bare for us all to see.

This House, and our entire state, owes a debt of gratitude to Catherine Corless for her work.

Many men and women alive today spent time in that institution, either as children or as young women. Today I offer them my personal solidarity and, as a citizen, my personal apology for the wrongs that were done to them.

Deputies will know that the Commission of Investigation into Mother and Baby Homes continues its work.

You will also know that cases have been made that the terms of reference of this Commission should be reviewed.

I want to acknowledge the calls made since Friday for an expansion of the Terms of Reference to cover all institutions, agencies and individuals that were involved with Ireland’s unmarried mothers and their children.

I am also mindful that by design the Commission is largely concerned with questions of legality; of legal liability, of compliance with the laws of the day and so on.
These are important questions.

They are however not the only issues which we should consider.

What happened in Tuam is part of a larger picture.

Part of a tapestry of oppression, abuse, and systematic human rights violations that took place all over this country for decades.

We must acknowledge that this very House debated legislation that allowed for those residing in institutions such as County Homes to work for little or nothing in return for the so-called charity that was shown to them.

Lest we contend that people did not know what was happening, let us remember that some members of this House spoke out against it.

In the Finance Committee debates on the Health Bill 1952, which took place in July 1953, Deputy Kyne condemned putting unmarried mothers in county homes to effectively involuntary labour as “having revenge on her”.

While Deputy Captain Cowan described as “absolute brutality” the fact, as he described it, that “They are not let out even”.

Earlier than that — before our Constitution had been finalised — members of the Oireachtas also raised questions about the ill-treatment of so-called illegitimate children.

Thus, as I said, this history may be dark, but it was not entirely unknown. We must acknowledge that sometimes it was fathers and mothers, brothers and uncles, who condemned their daughters, sisters, nieces and cousins and their children to these institutions.

And that sometimes it was not.

We must accept that between 1940 and 1965 a recorded 474 so-called “unclaimed infant remains” were transferred from Mother and Baby Homes to medical schools in Irish universities.

We must listen to, record, and honour the truth of people’s experiences. We must commit to the best of our ability to recognising, recording and making reparations for the truth.

Making these commitments and honouring them will not be easy. But we must – for those who suffered and also for future generations.

Establishing the truth is important for many reasons – but not least to ensure that the darkness of the past will not return in the future.

Irish women and Irish children must never have to endure such suffering again. As a feminist, as an Independent Minister and as an Irish woman I feel a moral and ethical compulsion to reach beyond the legal questions of what happened in Tuam and elsewhere.

That compulsion is driven to try to arrive at this truth. For it is only from acceptance of the truth that we can move past it; not by drawing a line under it, but by highlighting it.

By commemorating and memorialising it.

By honouring its victims.

By recognising the part that individuals, communities and institutions played in it.

By making sure that, while we still have time, we look to those who are still alive and accept their accounts of what was done to them, and of the wrongness of that. In the coming days, as Minister, I will start a conversation with advocates, with historians and scholars specialising in transitional justice.

The United Nations defines transitional justice as the set of approaches a society uses ‘to try to come to terms with a range of large scale past abuses’. Transitional justice puts survivors and victims at the heart of the process. It commits to pursuing justice through truth.

It aims to achieve not only individual justice, but a wider societal transition from more repressive times, to move from one era to another.

Taking a transitional justice approach means that we will find out and record the truth, ensure accountability, make reparation, undertake institutional reform, and achieve reconciliation.

In doing this I want to acknowledge the many people who have contacted me personally in recent days to tell me directly of their experiences. It is important to also ensure that we learn from international best practice in transitional justice, such as the Museums of Memory in Argentina and Chile, for example.

There may also be lessons to be learned from processes used to establish the truth in other contexts and other countries.

Writing about the Mother and Baby Home in Tuam, as well as other matters, in the London Review of Books last year, our Laureate for Irish Fiction, Anne Enright, said: “The living can be disbelieved, dismissed, but the dead do not lie. We turn in death from witness to evidence, and this evidence is indelible, because it is mute”.

Let us commit to do justice not solely through law, but through speaking and listening, and through believing what our eyes, our ears what our compatriots tell us.

Yesterday: What’s In It That’s So Frightening?

‘Will It Be A Year Where We Womaned Up?’

Birth Families And How Harm Is Determined

16 thoughts on “‘Let Us Not Disbelieve’”