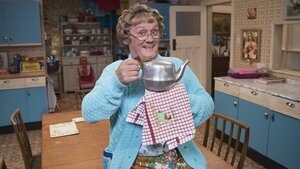 All Round to Mrs Brown’s.

RTÉ One today announced that Brendan O’Carroll’s brand new chatshow All Round to Mrs Brown’s is joining its Saturday night line up. Followed by The Ray D’Arcy Show, Saturday nights on RTÉ One will deliver a one-two punch of knock-out entertainment.

Fans of Finglas’s most famous granny can expect a mix of chat and general mayhem as daughter Cathy (Jennifer Gibney) interviews a host of celebrities overseen by the inimitable Agnes Brown (Brendan O’Carroll). The result promises to be an entertainment extravaganza full of celebrity guests, audience fun, frolics and outrageous shenanigans.

The six-part All Round to Mrs Brown’s will be simulcasted with the BBC on RTÉ One this Saturday 25 March at 9.15pm. Episode one will feature supermodel icon Pamela Anderson; Judy Murray, the mum of tennis star Andy; and Louis Walsh, plus music from James Blunt. And lots of surprises. 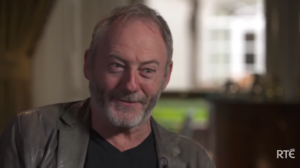 The Works Presents: Liam Cunningham takes place at 11.15pm on RTÉ One.

On tonight’s episode of The Works Presents… John Kelly interviews Liam Cunningham and the Game of Thrones actor has some stern words for people who deliberately spoil the show, referring to them as “low lifers”.

Cunningham tells Kelly: “In Spain we were being live streamed while we were filming, from drones. Everything we’ve done has been infiltrated which is terrible. It can appear like we are being precious about it, and it’s not. One of the great things about the show is these bizarre surprises. I’ve seen these cynical critics going ‘oh my god, did you see that last week?’ Suddenly the inner child comes out in them because they have been outwitted and they love it and so does the audience. It’s what we pay for. I like it as well, when I am reading the scripts I go ‘oh you’ve gotta be, you’re shitting me’ and I love that.”

16 thoughts on “Staying In Saturday Night?”