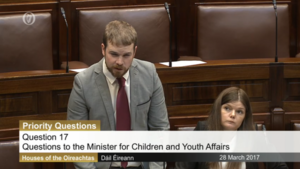 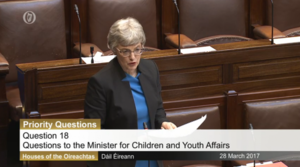 You’ll recall the second interim report from the Commission into Mother and Baby Homes which was given to the Minister for Children Katherine Zappone last September.

This interim report was to identify any matters that the commission felt warranted further investigation as part of the commission’s work.

Last week Fiach Kelly, in The Irish Times, reported that the indemnity agreement signed in 2002 between the then Minister for Education Michael Woods and 18 religious congregations – which served to cap the orders’  liability – may be extended to include children abused in mother and baby homes.

Well-informed sources said the delay in its publication was due to the controversial nature of the proposed form of redress.

One source suggested that it may never be published if there had not been public outcry over the commission’s confirmation last month of the discovery of the remains of babies and infants at the site of a former mother and baby home in Tuam, Co Galway.

In the Dáil, during Priority Questions.

Sinn Féin TD Donnchadh Ó Laoghaire raised the second interim report in the Dail this afternoon after asking what steps the State is taking in regards to protecting unmarked graves – other than the remains recently found at the Bon Secours mother and baby home in Tuam, Co. Galway – in order to prevent them from being interfered with.

Mr Ó Laoghaire also claimed that the second interim report does not recommend widening the terms of reference in the Commission into the Mother and Baby Homes.

Donnchadh Ó Laoghaire: “It’s my understanding, Minister, that the second interim report was before Cabinet this morning. The 27th of July last year, you issued a press release saying that the commission was to report back in September. That report has still not been published. Now you’ve committed to publishing it by the end of the month. It’s not published today, to the best of my knowledge. I presume it will be published in the coming days so I want to hear from you, when you intend to publish it.”

“But also, minister, to outline the reason for the delay because it has been with your department and with you for some six months now. And that has caused a great deal of concern and anxiety among survivors and I think it’s important that we get a sense of, for what reason was, what I think, was an inordinate delay in publishing this report was.”

“And also to state, Minister, it’s my understanding or has been reported that the report does not recommend an expansion of the terms of reference. That being case, I believe that the Commission [into Mother and Baby Homes] is no longer fit for purpose.”

Katherine Zappone: “Thank you, deputy Ó Laoghaire, I’m interested in your comments in that regard. I’d like to bring my comments though, responses, back to the question that you actually have asked me. As I know, I will take up some of those issues later on in terms of other questions and I think again in terms of the question about making decisions to bring forward injunctions. The Government, arguing, has the responsibility, something that we should consider, I’m saying I’m not necessarily, not willing to consider that. But my understanding and in terms of the advice that I have received that in order to do that, we need to have it brought to our attention, that there are some real concerns in relation to a preventative measure, in terms of different sites that may require, that may require an injunction. On the basis of people who have an interest in that regard. And so I would be open to hearing from those and consider the issue again in that regard.”

Previously: ‘What’s In It That’s So Frightening?’

‘It’s A Dishonest Charge Levelled Against Us’