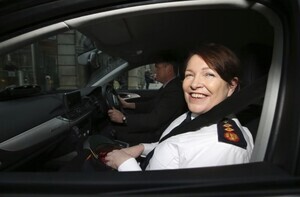 From top: Garda Commissioner Noirin O’Sullivan arriving at Leinster House this morning for an appearance at the Justice and Equality Committee in the Dail; Dan Boyle

The real errors lie in the appointment of the current commissioner, rather than her subsequent performance. Having been part of the problem, why was it ever thought she could be a solution?

I suspect I’ve had a more than average number of interactions with the Garda Siochána. As a politician paths cross on numerous occasions – when trying to deal with anti social behaviour; the policing of public events; or the odd protest march. For the most part these interactions have been overwhelmingly positive.

At other times I have transgressed. I’ve failed to drive my motor vehicle in a tardy fashion. I have been too attentive to my mobile phone. These brushes with our legal custodians were, on the whole, pretty judicious. These were fair cops, I thought.

I can only remember two incidents when I crossed swords negatively with members of the force, who I thought were acting with an attitude.

The first occasion was on Arranmore Island. I was breathalysed at two thirty in the afternoon, having just arrived on the island. When I commented that it was a futile, box ticking exercise I was told ‘you seem tired, sir’ before being threatened with prosecution under section this of that act. And no, there was no alcohol in my system.

The second event was when I had beeped my horn at a car that had cut across me. A nearby motorcycle Garda, who had heard my beep but hadn’t seen the cutting across, pulled me over to accuse me of road rage. He asked to see my licence.

On seeing my (non Irish) place of birth he proceeded to tell me, that had I come from here (Ireland) I would know how to drive properly. Imagine that being said to a person with a different skin tone. Community policing it wasn’t.

In the scheme of things these were two fairly trifling events. The attitude exposed was the confusion of judging with policing. I have found that those who are judgemental, tend to be less tolerant of being judged themselves.

It is a tough job. We live in a better society because they are there. I don’t expect them, nor the force they are part of, to be pristine. All State institutions reflect the society they are meant to represent.

Irish society remains too tolerant of a cutting corners approach in our institutions. What we should expect is that they enforce standards that are, at least, better than average.

The management of the Garda Siochana, is typical of the management of many of our State institutions. They seem to follow a deflect, deny, dump on approach to difficulties that arise in their organisation.

Confusing judging with policing is at the heart of the ongoing problems being experienced by the Garda Siochána. Problems that should be owned by this Garda Commissioner.

The real errors lay in the appointment of the current commissioner, rather than her subsequent performance. Institutional malaise is rarely, if ever, cured by those oblivious to the symptoms that have brought about the illness. Having been part of the problem, why was it ever thought she could be a solution?

It is those who made that decision who now need to come forward, take responsibility, and own that why.

22 thoughts on “Rap Sheets In Blue”