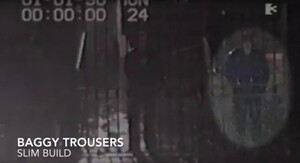 Further to the renewed appeal for missing Trevor Deely following enhanced VHS images of cctv footage showing a man speaking to Trevor outside his workplace shortly before he vanished.

I just wanted to share a video I put together of Trevor Deely’s timeline from the night he went missing.

I have highlighted the fact that it took him 42 seconds to walk from the first gate he passes to the second gate that he passes. The distance between the two gates is approximately 20 feet.

I have also included a still (top) showing another man waiting with the first man outside Trevor’s work one minute after Trevor enters the building.

I think the second person waiting outside really is a significant development that I don’t think has been picked up before.

It’s actually from the Donal MacIyntyre documentary [TV3’s Unsolved: The Disappearance of Trevor Deely], but MacIntyre actually incorrectly states it’s Trevor, we can see from the timestamp that it’s not.

I have also highlighted the fact that Trevor took 11 minutes to walk from the first CCTV camera to the second time he is seen on CCTV, by Google maps it would suggest a stroll of a mere 6 minutes.

Previously: Out Of The Shadows

Further to your post about the Trevor Deely footage. In the CCTV video footage released by the Gardaí last week – showing Trevor enter and later exit that bank gate – Trevor’s shoulder doesn’t edge in front of the view of the redbrick pillar as he entered (see here, from 3.06).

But the still used in MacIntyre’s documentary, above, clearly shows the person on the left edging in front of the view of the pillar (see here, at 21.54) as a man stands on his right.

Confusingly, as Mr MacIntyre’s documentary showed the still, Mr MacIntyre, in a voiceover, says: “As Trevor left the building he was seen again on the camera which had captured him on the way in.”

So it’s not clear if this was supposed to be a still of Trevor entering or exiting the gate.

Either way, the Garda CCTV footage does show Trevor edge in front of the pillar when he leaves the building (see here, at 2.04) but there is no man on his right, at this point.

Out Of The Shadows