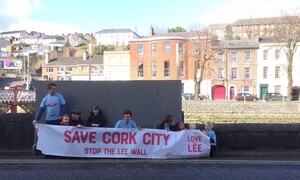 From top: Save Cork activists demonstrate the visual impact of the OPW’s flood relief scheme for Cork; Dan Boyle

I’ve written dozens submissions to State bodies down through the years. These have tended to be technical in nature, sent with no real faith that they would ever be taken seriously. When the OPW recently sought submissions on its proposals to curb flooding in Cork, I thought it might be novel to tell them what I really thought.

As part of the ongoing public consultation on this issue, I would like to add my concerns to what is being proposed. In the first instance, I feel the scope of what is being examined is insufficent. A flood plan needs to be constructed for the River Lee in its entirety.

The main elements of such a plan should be maximise the use of the natural features that help counter flooding risks. Chief among these would be immediate identification of whatever flood plains, along the route of the river, have not been built upon, insisting that no development can occur in these locations. Large scale planting of trees alongside, or as close as possible to river banks, offers a low tech response to reducing water levels.

These measures should be put in place before any engineering approach is considered. It is this emphasis on engineering, over engineering, that makes what is being proposed for this relief scheme so unacceptable.

There is almost a soullessness in these proposals. What is being suggested is insensitive to the character of Cork City. It ignores the special position of the river in the history and culture of the city. Famed in song and story as it were.

Even as ‘solutions’ these engineering approaches have hardly inspired. Reduced to its most simple essense, the OPW seems to be saying to the people of Cork City (and the business owners within the city centre), that the quay walls need to be raised to deal with the immediate risk of flooding, but such raising would only be an intermediate step, with flexibility being sought to raise these walls even further to counter medium and longer term risks.

This is band aid risk management. This is a problem which requires a more serious approach than that.

Imprisoning the river is not a solution. Technology has developed to identify more effective, less intrusive methods of dealing with the threat of flooding.

The continual opposition of the OPW towards constructing a barrage in the lower harbour, has been baffling.

Throwing out top of the head/back of an envelope figures suggesting that a barrage would cost between €500million to €1billion to construct, has been entirely dishonest. It is insulting to claim that degree of variance exists for a single piece of public infrastructure. It is obviously just a figure thrown out there to discourage its serious consideration.

There is an onus to provide an honest costing. There is also a responsibilty to provide an independent cost benefit analysis. Part of such an honest analysis would be to place the potential a barrage could play in the generation of renewable energy.

There are dozens of other technical and environmental arguments that can, and I know are being made. This is a personal overview. I am hoping that this is a real consultation, where concerns are listened to, and then get acted upon. That will result in a new plan.

A publicly acceptable plan, an environmentally sensitive plan, a plan that truly cherishes a river that is so much a part of us.