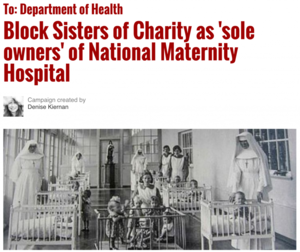 Denise Kieran has set up a petition (above) on Uplift against the Sisters of Charity gaining ‘sole ownership’ of the new National Maternity Hospital.

It already has just under 70,000 signatures.

The Sisters of Charity is one of 18 residential institutions that is highlighted by the Ryan report 2009 to have been responsible for child abuse.

They still owe €3 million to the redress scheme for its survivors. The Sisters of Charity, along with three other religious congregations, were responsible for the management of Magdalene Laundries.

In 2013 they stated they would not be making ANY contributions to the State redress scheme to the women who had been subject abuse in the Magdalene Laundries.

The Department of Health now want to give ‘sole’ ownership of the new €300 million State-funded National Maternity Hospital.