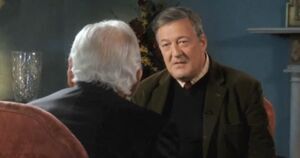 From top: Stephen Fry on the ‘Meaning of Life ‘with Gay Byrne; Dan Boyle

‘Christ you know it ain’t easy
You know how hard it can be
The way things are going
They’re going to crucify me. ‘

The Ballad of John and Yoko – The Beatles

Among my guilty pleasures is a predilection for table quizzes. At a recent quiz the question was asked as to what was the last song The Beatles recorded as a single only release. Mentally leafing through my record collection (vinyl records), I worked out it must have been ‘The Ballad of John and Yoko’.

Technically only John and Paul were involved in its recording. George and Ringo must have been recording the B-side (the other side of the record!), George’s ‘Old Brown Shoe‘, a better tune as it happens.

A number of years earlier Lennon had got himself and the group into hot water, with his claim that The Beatles had become ‘Bigger than Jesus’. This led to bonfires of Beatles records in the US, and with that an increase in record sales in order to add more fuel to the fires. Lennon never said that The Beatles were better than Jesus, despite Jesus never having cut it as a recording artist.

The reaction to the ‘Ballad of John and Yoko’ was far more muted. Some US radio stations refused to play the song, due the use of Christ as an exasperation and the allusions to crucifixion, which were felt to be gratuitous. Formal bans seemed to have escaped the song. In Ireland it reached number one.

Ten years later, the Monty Python film ‘The Life of Brian‘ (largely financed by George Harrison) was banned from being shown in Ireland. The Irish film censor was Frank Hall. He was best known for his RTE television series ‘Hall’s Pictorial Weekly’, Ireland’s version of surreal comedy.

Earlier in his career, as an RTÉ reporter, he had interviewed The Beatles while they were in Dublin, striking quite the condescending tone. After his death it was revealed he had had a long running affair with Ireland’s favourite agony aunt, Frankie Byrne.

I include these details to support an argument that any prohibition on what people should say, hear or see, in relation to matters religious, is at best right wing virtue signalling, but at all times is an attack on basic freedoms.

In government the then Minister for Justice, Dermot Ahern, re-introduced a Defamation Bill that had originally had been introduced in 2006. His predecessor, Brian Lenihan, had withdrawn the bill to allow for further consideration. At that stage the bill was solely concerned with libel.

The ‘offence’ would be covered by a number of caveats, making any prosecutions improbable under this provision. I despised this ‘Irish solution to an Irish problem’ approach. I spoke against the provision in my contribution to the Seanad debate, citing the ‘Jehovah‘ scene from ‘The Life of Brian’.

And yet I voted for the bill, feeling obliged to do so. The nature of being in government throws up many such compromises.

Did I like it? No. I squared my conscience by knowing that the law passed was unworkable, and that no prosecutions would ever follow. I was also given an assurance that a referendum on the constitutional provision on Blasphemy would soon follow.

I find the liberal angst heaped on Defamation Act to be largely irrelevant. The issue remains the constitutional provision. Get rid of that and we all can talk more freely.

63 thoughts on “Christ You Know It Ain’t Easy”