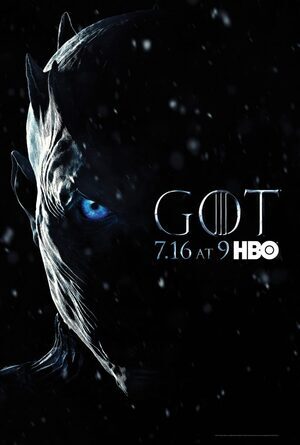 1. To quote another fantasy series, we come to it at last: the great battle of our time.

2. The seventh season of Game of Thrones, despite coming three months later than the usual April debut, consists of just seven episodes. An eighth and final season will follow in 2018.

3. The shorter season and later debut mean that more time has been spent on writing and filming, while vastly more cash has been spent on each episode. That’s quite clear from those sweeping battle shots and brand new sets.

4. Filming was also pushed back so as to avoid the usual summer (as in last summer) shooting schedule. It’s winter in Westeros now, so shooting took place later in the year in Northern Ireland.

5. It’s endgame time: Season 7’s plot will see the long-gestating confrontation between, well, everybody, as the war for the Iron Throne enters its (apparent) final phase. Fresh from her Corleone-esque massacre of her enemies, Cersei Lannister sits on the Iron Throne but her reign promises to be a short one as Daenerys Targaryen arrives to reclaim her throne. Meanwhile, in the North, Jon Snow aims to keep the White Walkers on the right side of the Wall, because if he fails, it doesn’t matter who rules King’s Landing. Meanwhile, Arya Stark may just make it back to Winterfell, Tyrion will continue to find his place in the world and a zillion other plot points will approach their conclusion.

6. If all that sounds like gibberish to a non-fan, well, it is, but make no mistake, Game of Thrones is the real deal. Everyone may live in castles and swing swords, but themes of politics, class division, family religion and faith, the horror of war and more make it one of the most brilliantly realised TV dramas of this or any other era.

7. On top of that, and the masterful acting and production value, I’ve always said the key to Game of Thrones addictive success is the same as what made Breaking Bad such a hit. Right from the very beginning, the question was put to the audience: how’s it going to end? With BB, the question was what will happen when Walter White is caught; here the question was and is who will be the last one standing? Each time a new person has climbed those steps over the past six years to sit on the throne, it has always felt temporary. Now that Dani and (as it turns out) Cersei Lannister are set to go to war with one another, whichever one comes out on top really will be the conqueror.

8. This show famously hasn’t shied away from killing off its heroes, don’t forget, so it’s entirely possible that fearless, scheming thunder-bitch Cersei might well be that last one standing. Unless (personal prediction alert): history repeats itself and the Kingslayer becomes the Queenslayer, but we could go on about that all day.

9. Along with the vast returning cast, the great Jim Broadbent has taken up a role for season 7.

10. As with season 6, events of the show have long overtaken the events of George R.R. Martin’s source novels. His last instalment, A Dance with Dragons, was published in 2011, while The Winds of Winter is still a work in progress. In your own time, George.

Verdict: Do we even need to say?