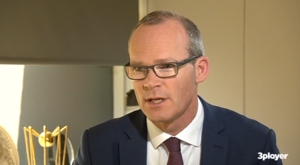 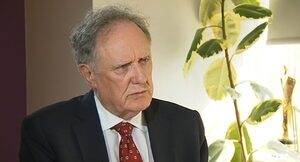 In a pre-recorded interview with Fine Gael’s Minister for Housing Simon Coveney, who is running in the Fine Gael leadership race against Minister for Social Protection Leo Varadkar…

Mr Coveney said he is different to Mr Varadkar who, earlier this week, said he wants to lead a party for “people who get up early in the morning.”

In addition, Mr Coveney said  “those people are as important to me as people who pay for everything” referring to people in receipt of social welfare payments.

The Housing Minister also called for people to judge him based on his actions, pointed to his €5.5billion social housing plan.

Simon Coveney: “I think there is a choice for the party that’s quite different.”

Vincent Browne: “Tell us the choice, between one person who says what and the other person says. Tell us both.”

Coveney: “I will. What I have been talking about is a party that represents everybody. Unlike most parties in the country at the moment, many of the smaller parties in particular, focus on niche areas in society and only represent that group of people and then actually get political traction on the basis of division and anger and protest.”

“What I’m talking about is Fine Gael representing someone who is unfortunately in a sleeping bag tonight on the streets of Dublin, as well as supporting people who are creating thousands of jobs. And supporting them and celebrating that success.

“This is a party that I joined and it’s a party that I’ve been a part of for nearly two decades of my working life that I believe has to get the best out of everybody regardless of their limitations or disabilities or social disadvantage or whatever. And…”

Browne: “Ok, that’s what you stand for…tell us how…”

Coveney: “I am not the kind of person that talks about Fine Gael only representing the person that gets up early in the morning.”

Browne: “And that’s what you stand for. Now tell us how that differs from what Leo Varadkar stands for?”

Coveney: “Well I think that is my vision for the country, is one…no, let me finish now and I’ll get to your question.”

Coveney: “My vision is one of social justice, as well as economic progression. And I think that the approach that I have, that Fine Gael needs to reach out to people who don’t naturally support us and who may never support us in the future but our responsibility to try and get the best out of those people in society, not in some kind of dependancy way but in an enabling way.”

“I think that is a very different message to what I’ve heard from Leo Varadkar this week when he talks about Fine Gael being the party of the person that gets up early in the morning to work. Of course those people need to be represented by Fine Gael because they pay for everything. But there are many people who need the State’s intervention to allow them fulfil their potential and those people are as important to me as people who pay for everything.”

Coveney: “I think that is very different vision for the party.”

Browne: “Ok, he talks about a sense of, culture of entitlement in the country. Do you perceive that?”

Coveney: “I mean, I think there is a politics in Ireland at the moment, that calls for the State to deliver people’s rights on everything. A right to a house, a right to healthcare, a right to education, a right to a decent income.”

Browne: “Are you not in favour of that?”

Coveney: “The way in which you achieve it is to ensure that the State enables people to make a contribution to society, as well as a dependency on a government. And I think that is the big difference between me and the hard left. And I think, you know…judge me on what I’m actually doing. I mean, in housing policy at the moment, Vincent, people will talk about the numbers and so on. We have a huge social housing build programme that’s now under way, it’s a €5.5billion project and so on. But the real change, actually, that I’m looking to bring to social housing policy in Ireland is forcing integration.”

“I no longer accept the hard-left arguments that we should designate whole parts of cities and fill them with social housing estates in a mono-tenure way. Instead we have to ensure that social houses are part of private developments and that private housing is part of new social developments…”

Browne: “Are you suggesting that Leo Varadkar is part of the hard left?”

Coveney: “No, I’m not. I’m not suggesting anything about Leo Varadkar, I’m talking about myself.”