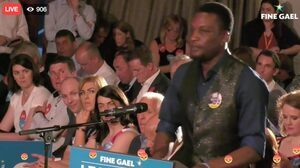 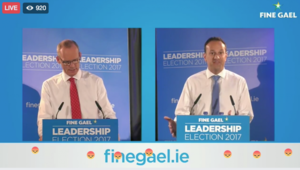 During the fourth and final Fine Gael leadership hustings, a man called Joseph (top) asked about direct provision. He said thousands of Irish people can see the direct provision system is an act of disrespect to humanity.

He then asked how either Simon Coveney or Leo Varadkar would address this, if they became Taoiseach.

“The [Bryan] McMahon Report recommends safeguards to ensure that no one is left in the asylum system longer than five years. What are your intentions regarding the people who have been in the asylum system for over five years, especially those who are not eligible to have the single application accessed under the new single procedure or people who are on deportation orders?”

“First of all, in relation to people who’ve been here for many years and who are essentially in limbo, because they are, because for many people, it’s actually almost impossible for the Department of Justice to establish a number of the facts that they’re trying to establish around people who are here as to whether they should be eligible for asylum or not.

“And so people just are here in that state of unknowing what the future holds and I do think if we advocate, as we do, for undocumented Irish in the US, to have a path to be able to regularise their own position. I believe, also in Ireland, we should allow for an opportunity for people to regularise their position over time if they’ve been here for many years.

“I also think that it is no way to actually cater for people who are waiting for asylum decisions here, beyond a certain period of time, for people to be in direct provision. People who want to make a contribution, people who are essentially living with very small amounts of money per week and with the State subsidising their lives, but really unable to make any positive contribution to society for various different reasons in terms of barriers that are put in place.

“But I do think what we have at the moment is a system that takes far too long to make decisions and therefore we’re asking families and individuals to stay in conditions which are not conducive to contributing in a positive way to society. And I know Joseph well, he’s a great guy. But there is change in this area that’s needed and of course that puts more pressure on a minister like me, in terms of social housing provision which is why we’ve committed €5.5billion to a social housing build programme that’s going to add 47,000 social houses.”

“I suppose the idea of direct provision, when it was first established, I think it was probably back in the 1990s at this stage, was that people would be in direct provision for a couple of months while their applications for asylum or refugee status would be decided on and if they got status, they would then leave direct provision. If they didn’t, then they’d obviously would have to leave the country if they were found not to be eligible for refugee status or asylum status.

“The real problem is that people are now staying so long in direct provision. And there actually are people who have status, who’ve been given leave to remain, who’ve been given refugee status, but are still living in direct provision because there is no housing available for them. That’s a terrible situation to be in for people, they are still living in Mosney for example, the old Butlin’s camp, who have been given status but there is no homes for them to go to and I think that’s really, really difficult for us as a society to stand over.

“I do think things will improve. We brought through new legislation, Minister [Frances] Fitzgerald, the Minister for Justice, has finally, after a lot of hard work, successfully brought through the International Protection Act. And that’s going to change things, cause at the moment you can apply for different statuses, you can apply for different types of statuses at different times. And under the new rules, you’ll apply for all types of status on day one.

“So, at the moment, you might apply for refugee status, not get that, apply for leave to remain, then not get that, then judicial review it, she’s going to streamline that whole process so decisions are going to be made a lot quicker and I think that’s a real step forward and it’s a tribute to her and Dave Stanton, in fact, for getting through that legislation.

“One thing I’d like to see examined. I haven’t studied it in detail myself  so I don’t want to make a definite commitment on it but I do think people who are in the country for a long period of time, whose status hasn’t been decided on, we should consider giving them the right to work. It must be a very frustrating thing to be in a country, you’re waiting on a decision, you want to work, you want to contribute, you want to make money for your family, you want to give something to the society you’re now living in and I think that’s something we need to take a long, hard look at.”