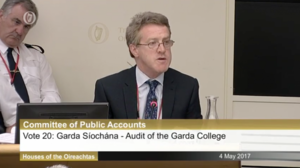 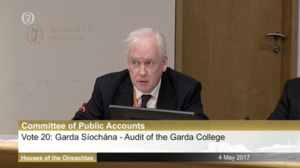 The Garda College interim audit report – which lays out serious financial irregularities at the college in Templemore, Co Tippeary – will be further discussed.

Those expected to attend include:

Readers will recall how on May 4, during a PAC meeting, Garda Commissioner Noirin O’Sullivan said she first learned of the issues at Templemore from head of human resources at An Garda Siochana John Barrett during a “very brief conversation” on July 27, 2015 while they were having tea.

Mr Barrett maintained it lasted for more than two hours.

Further to this, Mr Barrett later released a 122-page file to PAC, which contained a letter he had written to the Chief Administrative Officer (CAO) of An Garda Siochana Cyril Dunne, on September 20, 2015, giving details of the meeting.

This letter can be read here. 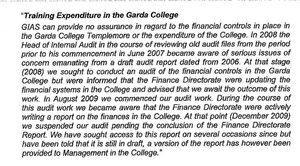 Readers will recall how Niall Kelly explained, in his interim report of February 2017, that he deleted a paragraph (above) from the final version of a report on the Garda College in 2011.

He claims he deleted the paragraph after he was assured that the issues were addressed by Executive Director, Finance and Services Michael Culhane.

At the PAC meeting of May 4, Mr Kelly said he felt he had been “duped” and that he was caught in the “circling of wagons”.

During the PAC meeting, Sinn Féin TD David Cullinane  had the following exchange with Mr Kelly and Mr Culhane.

Niall Kelly: “I was provided with a summarised report from Mr Culhane and assurances that the issues were being dealt with.”

Michael Culhane: “I did not give them directly to Mr Kelly. It went to the CAO [Cyril Dunne] showing the progress that had been made on some of the issues.”

Cullinane: “However, Mr Kelly saw this as assurances because he said he deleted the paragraph because of assurances that were given.”

Cullinane: “That is what I am trying to establish exactly. Mr Kelly’s view now is that those assurances were not worth the paper they were written on. Would that be a fair...”

Cullinane: “Mr Kelly is brave enough to accept that he made a mistake.”

Vice Chairman Alan Kelly: “In the interest of fairness, does Mr Kelly feel it was multiple people or one person?”

Tomorrow’s PAC meeting, in committee room 3, will take place over two sessions, at 9am and 5pm.

Those who wish can watch it live here

Previously: Out In The Cold

9 thoughts on “Squaring The Wagon Circle”