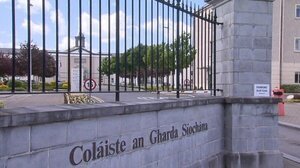 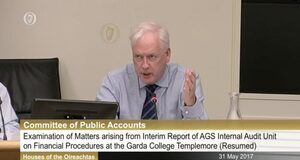 Several senior members of the civilian staff at An Garda Siochana attended the Public Accounts Committee to discuss the internal audit report into the Garda College, compiled by head of internal audit Niall Kelly and given to the PAC earlier this year.

Mr Kelly’s report was carried out for head of human resources John Barrett, who started his job in October 2014, becoming aware of financial irregularities at the college in June 2015.

Mr Kelly’s report found concerns similar to ones previously highlighted in a separate report by Barry McGee in 2008.

Mr Kelly’s report audited expenditure worth €112million from January 1, 2009 to March 31, 2016 and identified 48 separate bank accounts relating to the college.

In addition, rent worth €124,903 was collected for the use of Dromard Farm even though the OPW legally owned the land and, therefore, was entitled to the money.

Readers will recall how Garda Commissioner Noirin O’Sullivan told PAC on May 4 that she first learned of the concerns on July 27, 2015 and that, the following day (July 28, 2015) she set up a steering committee to look into the matters.

Some notes from the meeting:

– PAC heard that, on June 30, 2015, Garda’s head of legal affairs Ken Ruane met Mr Barrett and was told about the issues relating to the college. Mr Ruane was also told that the matters had been reported to the Garda’s chief administration officer Cyril Dunne who passed them on to Ms O’Sullivan. Mr Ruane told PAC he had notes to prove his concerns were passed to Ms O’Sullivan.

– PAC heard that the steering group to look into the Garda College issues was in operation since July 2, 2015.

– None of the civilian staff at PAC could say definitively if An Garda Siochana is tax compliant.

– Head of Legal Affairs in An Garda Síochána Ken Ruane told the PAC he was asked to change minutes he took of a meeting of the steering group, on August 6, 2015, by the CAO Cryil Dunne.

– In a letter from Michael Culhane to Noirin O’Sullivan in October 2015, Mr Culhane asked: “Is JB (John Barrett) unwittingly guilty of a criminal offence under the Official Secrets Act?” Mr Barrett  told PAC he sought, directly and through his solicitor, to get this letter six times but was denied. He eventually got the letter but 85% of it was redacted. At PAC, Mr Culhane admitted this claim was unwise.

– In a letter Michael Culhane sent to Niall Kelly in February of this year, he accused Mr Kelly of being unprofessional, misleading and mischievous. At PAC, Mr Culhane withdrew the claim.

– The PAC heard senior gardaí have made out cheques, of up to thousands of euro, to themselves.

– Mr Kelly said they are now being examined to see if these cheques have been vouched for – with one audit going back to 1998.

– Social Democrat TD Catherine Murphy asked Mr Kelly if there was any indication of any Templemore monies being sent to a bank account in Dublin under the control of a former senior Garda officer. Mr Kelly said he’d rather not answer that question because it’s the subject of audit.

– In a June 25 email sent by Barry McGee, the author of a report in 2008 which identified many of the issues/concerns highlighted in Niall Kelly’s 2017 report, to John Barrett, Mr McGee wrote:

“I think the problem in approaching the solving of this, is that because of the potential negative reputational risk for the organisation – in that once this starts to be sorted it hits the public media, either though audit etc, it could have very big ramifications – like the accounting officer [Garda Commissioner Noirin O’Sullivan] appearing before the PAC, etc – so it is how to solve this quiety without risking exposure – again this is just my opinion – so this report was quiet [sic] sensitive – Michael [Culhane] has said it you wish to meet to discuss this etc might be useful – It is not necessarily a nice report, I would like to think that the report is more based on systems and how systems  were set up and evolved possibly incorrectly particularly with view to the way government accounting and government accounting regulations apply currently.”

“For example, today or at the moment, the Garda Siochana organisation cannot for example open a bank account without seeking sanction from the DPERs, whereby if you have to write to them setting the purpose of the bank account and they give sanction for the same to open it – and of course setting up companies or entities would need ministerial sanction I would imagine as it is a big deal in principle to set up a sub company from a department – for example,

in terms of the purchase of land, this is a problem for the college because the Garda Commissioner is not meant to hold any lands under legislation as far as I am aware and such lands will have to be transferred by some mechanism to the OPW.

– Mr Kelly told PAC that, following a meeting on October 1, 2015, in which Noirin O’Sullivan perused the 2008 McGee Report, she felt the 2008 report was “overly critical”. Mr Kelly also said there was a reticence among Commissioner and others to accept the conclusions of the 2008 report.

“Chairman, I come before you knowing the democratic power of this institution you represent the people of Ireland, you are the elected representatives. And I come here hoping to leave, having answered your questions fully and thoroughly.

I see this as a very significant matter for an organisation who must enjoy the trust of the people of Ireland, who must enjoy that trust because the powers that can be exercised – caution, arrest, detention – are of such constitutional significance that we need to have our house, not just in order, but in absolute order.

“So I sit here with a sense of embarrassment that we haven’t. But with no sense of personal regret that I raised this issue and that I continue to believe that I did the right thing in persisting.

“And there’s credit due to people on my right and on my left for their assistance in this regard. But I think it is clear, I feel quite frankly, that I didn’t have universal support and that reality is a reality that I want you to consider.

“I look, as I said to Mr [David] Cullinane, I look for no bouquets in this, I feel that I am doing my job but I want you to understand it’s not easy. And the assistance that you can give in ensuring that the standards that are required of us are demanded by you consistently and that we deliver – that will embolden others to do the right thing and to step forward in difficult situations. That is a key cultural change that you can help make.”

The PAC meeting can be watched back in full by downloading the video files from here [Committee Room 3].

5 thoughts on ““I Am Doing My Job, But I Want You To Understand It’s Not Easy””