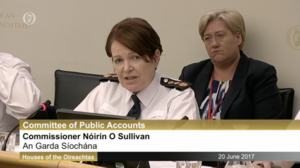 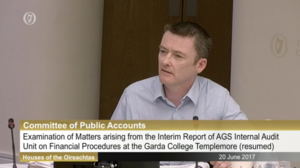 Garda Commissioner Nóiriín O’Sullivan is continuing to be questioned in relation to the financial irregularities at the Garda College.

Readers will recall how Ms O’Sullivan has maintained that she first became aware of these issues on July 27, 2015.

And that the Comptroller and Auditor General Seamus McCarthy was not told until May 31, 2016  – by head of Internal Audit Niall Kelly.

Mr McCarthy told the PAC previously, and this morning, that the matters should have been referred to him immediately.

It has now emerged Garda Commissioner Nóirín O’Sullivan sent a letter to the Comptroller and Auditor General Seamus McCarthy on July 31, 2015.

From this morning’s PAC…

David Cullinane: “I just want to get to a letter that you did send Mr McCarthy and he furnished this committee with the letter. The 31st of July, 2015. Was that before or after you were made aware of the irregularities at the Garda Training College?”

Noirin O’Sullivan: “It was four days after.”

Cullinane: “And was this a letter of representation or understanding, Mr McCarthy?”

Seamus McCarthy: “A letter of representation.”

Cullinane: “And what is a letter of representation?”

McCarthy: “It’s a letter that we seek from an Accounting Officer at the end of the aduit to basically confirm to us that all accounting records have been made available and that all information that should be brought to our attention has been.”

Cullinane: “And I’m reading from it her, Commissioner. It says:

‘I can confirm to the best of my knowledge and believe, and having made appropriate enquiries of my officials at An Garda Siochana, the following representations, which are given to you in connection with your audit of the Appropriation Account for Vote 20 (An Garda Siochana) for the year…

‘I have disclosed to you all the instances of loss, fraud or irregularity are known to have occurred or have been reported in the year.’

O’Sullivan: “Well, deputy, what I had been informed on the 27th, on the evening of the 27th. What I was informed was, in the report from Mr Ruane that basically Mr Barrett had identified a number of issues. The nature of…”

Cullinane: “No, no, sorry Commissioner, that’s not the case, I asked you earlier on and you were very clear to this committee that the first time you became aware of irregularities in the Garda Training College in July 2015. You were briefed on the issues, you had a meeting with Mr Barrett and others I take it aswell. But you were most certainly aware of the issues involved

O’Sullivan: “Deputy, can I be very clear on what I knew. What I knew was that Mr Barrett had raised certain matters with Mr Ruane, our Head of Legal Affairs. Mr Ruane had reported those matters to the Deputy Commissioner Strategy Governance. That was on the 27th. On the 28th I got a report – so three days before this letters was issued –  I got a report from the Deputy Commissioner. I caused enquiries to be made in my office…”

Cullinane: “With respect, you’re counting down the clock..”

1 thought on “‘You Did Not, Commissioner, Disclose All Irregularities’”