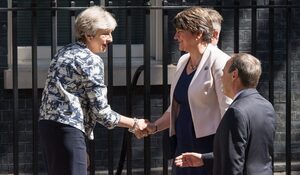 The DUP’s 10 MPs will back the Tories in key Commons votes, starting with the Queen’s Speech later this week, but there will be no formal coalition.

The talks focused on financial support for Northern Ireland and Brexit.

The DUP has claimed the UK government has agreed to improve the treatment of military veterans in Northern Ireland as part of the agreement but played down reports that it had sought £2bn in extra funding for Northern Ireland in return for their support.

Conservatives agree pact with DUP to support May government (BBC)

DUP and the Conservative party have agreed to:

Keeping the triple lock for pensions

Keeping defence spending at 2% of GDP

There is also a financial package worth £1bn over two years. There will also be “new flexibilities” in terms of how £500m already committed to Northern Ireland can be spent.

Downing But Not Out