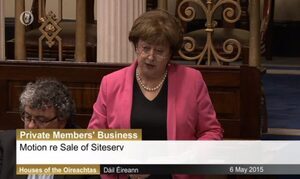 Social Democrat TD Catherine Murphy speaking about the sale of Siteserv in the Dáil on May 6, 2015

Tom Lyons reported that the Commission of Investigation tasked with investigating the sale of Siteserv to Denis O’Brien, and other matters – which is being led by High Court judge Brian Cregan – has told Social Democrat TD Catherine Murphy that if she doesn’t reveal her sources, “it may not be possible to advance some of the issues raised” by her.

The Commission wrote to Murphy earlier this month in relation to her 300-page witness statement, much of which it said appeared to be “dependent upon information and views supplied to you by unidentified persons”.

It said that the allegations in her statement and accompanying documentation appear to be based on confidential banking information about named individuals that “may have serious implications for the good name and reputation of the person or persons mentioned.”

The Commission said it was “of the view that, if such allegations, information and views are to be admitted into evidence, it will be necessary in the interests of fair procedures, and in order to protect the constitutional and person rights of the persons named, that the identity of the sources of such information and views should, in the first instance, be disclosed to the Commission.”

It said it would then consider whether such allegations, information and views should be admitted into evidence, and whether the identity of the source should be disclosed to witnesses or potential witnesses “bearing in mind the right of a witness to confront his or her accuser, where serious allegations are made against him or her.”

The Commission requested Murphy disclose the source or sources of 23 allegations made in her 300-page witness statement to the Commission as well as furnish it with six emails without redacting the name of their sender.

…“The Commission is appreciative of the assistance you have provided it to date,” it said. “However, if and to the extent that sources are not disclosed and / or unredacted documents are not made available to the Commission, whether based on a claim of parliamentary privilege or otherwise, it may not be possible to advance some of the issues raised by you.”

“Yes, I received a letter from Justice Brian Cregan during the week, I think it was Wednesday. I will be taken, and have taken and will take further advice before responding in detail. Essentially, I’ve given a commitment to people who came to me with information that that would be treated in confidence. I gave them absolute assurance that that would be the case and I’ll respect that. I feel duty-bound to respect that.”

Bringing The House Down