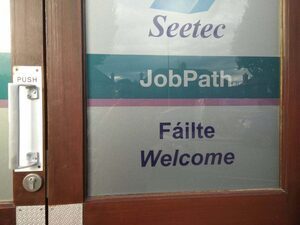 Austerity is hard on everyone, even on corporatism, which has also been feeling the pinch and is now reduced to pilfering public monies and pensions normally reserved for the poor and the diligent.

One of corporatism’s ways of inveigling itself into position to siphon off public funds requires a pretense of offering help and social care. Corporatism looks awkward and ungainly in a nurse’s outfit. Like the big bad wolf dressed as granny. But, old whore that it is, corporatism will do anything to keep profits buoyant. There is no stoop too low for corporatism.

There are also sorts of complex arguments circulating about the meaning of employment activation; its effectiveness or otherwise, and it all comes served with its own language and terms, and concepts within concepts, and reports about reports and talks about talks.

But behind the fog of verbiage is a very simple truth. Corporatism, always hungry for growth and expansion, is attempting to blame the poor for causing the limits to corporatism’s expansion.

Because by blaming the poor, the poor can then be managed by corporatism, and “fixed”. That process will then create opportunities for further investment, growth and expansion for corporatism.

One of the advantages of living next door to Britain, speaking the same language and being able to look in the TV window to see what they’re at, is the foresight that is afforded to us here in Ireland for what might be coming at us down the line.

Our governments tend to be unadventurous and lazy, taking ideas off the British rack and implementing them here with some kind of local twist.

This is how we got JobPath, which is based on Britain’s Workfare, which itself is based on an American model designed by corporate entities.

In the online magazine, The Conversation, it was reported in 2015 that job opportunities in Britain were opening up for psychologists to find a cure for unemployment by curing the unemployed of whatever psychological defects were supposedly causing them to be unemployed.

Psychologists were finding work in Job Centres. Gambling bankers, white-collar criminals, technological advances and exhausted markets aren’t considered credible causes for unemployment. No. The cause of unemployment is the unemployed. If there were no unemployed, there would be no unemployment. Simple.

The report in the Conversation, goes on to show that in Britain for many poor people, unemployed people can now be sanctioned and lose benefits for failing to be upbeat and optimistic.

The official term is “absence of positive affect”. It means you are not trying to be employable, because apparently employers don’t hire glum chums.

So, the Tory solution to unemployment is to harasses, bully and threaten the unemployed into being happy. The more pessimistic you are, the more they work you over. They’ll make you happy if it kills you.

This must rank as some kind of psychological torture. Being officially told you are worthless for not being happy. That you are the architect of your own worthless condition by not even trying hard enough to smile.

The article goes on to discuss the growth of systems, services and jobs around the “problem” of unemployed people, speaking to Dr David Webster, Honorary Senior Research Fellow, University of Glasgow, who is leading a campaign against the inequities and cruelties of the Workfare system in Britain. Dr Webster regards the sanctions system as a “secret penal system.”

He says that the way the system works, once it has identified the unemployed as the problem causing unemployment (a bit like saying that the dead are the cause of death), the unemployed person then becomes the focus of a new “industry”, an industry that creates wealth for everyone, except the unemployed themselves who must, in order for the industry to function, remain poor and in need of “help”.

This is like a kind of built-in obsolescence. Corporatism was always good at that kind of built-in flaw to keep sales steady. Anyone can see that it is in no one’s interest to ever fix such a golden goose as a broken unemployed person.

What better way to drag out the fix than to throw a team of psychologists into the mix? They can debate forever as to whether or not the subject is fixed, and never arrive at a conclusion, as is the nature of their profession, all the time drawing down public funds in the form of salaries and other related expenses, while also creating further potential for expansion and growth in mental health assistance and “happy” drugs and questionable cures delivered by questionable experts.

Stubborn cases can be criminalised and fed as raw material into private prison systems. All this expansion into new areas of human management will require more staff, creating valuable new “jobs”, and more growth and more expansion. The sky’s the limit when it comes to managing and fixing the poor.

Notice how the real reasons for unemployment, the complicated interwoven problems of technological advance, gush-up capitalism, the environmental system’s limitations to perpetual growth, economic boom and bust, and all the other complexities that go towards creating unemployment are conveniently left off the table, replaced by such a simplistic assessment as the one put forward by our latest Taoiseach, Leo Varadkar, that unemployment is caused by people who don’t get up early in the morning.

How brilliantly profound. We just elected a leader who believes unemployment is caused by late sleeping. Oh wait, we didn’t elect him, that’s right. But he’s there anyway, so I guess we’re stuck with him. That’s democracy, huh?

Corporatism was born out of small white lies, with the occasional huge black one thrown in to keep the ball rolling. It was born and enriched through advertising, through slipping and sliding and smiling and selling.

Corporatism is now selling the idea to the working public that the poor are the cause of high taxes, and they are selling to the poor the idea that they are broken and need to be fixed by… who else but good old uncle corporatism, who will teach them all to smile again, and will, presumably, given enough time and public monies, teach the whole world to sing in perfect harmony.

This is the logic of corporatism laid bare in austerity, that now sees corporatism using people as commodities to generate profits for investors. Corporatism doesn’t care where the profit comes from. It just wants the profit. It needs the profit.

If corporatism has to pretend to “help” social casualties to do that, well, it’ll put up some kind of pretense at helping, with some small token investment. Maybe throw a few re-conditioned computers into an office someplace and slap a “Social Help Resource” sign over the door.

Hire a few clerks to man the desks, tell them they’re a team, give them a stipend and tell them to smile as big as they can. Job done. Now gimme the money!

This is what employment activation is. It is corporatism selling the idea that it’s okay now to consume the poor.

Eamonn Kelly: What The Hell Is A Section 110 SPV?

72 thoughts on “Jobpath And The Reality Of ‘Employment Activation’”