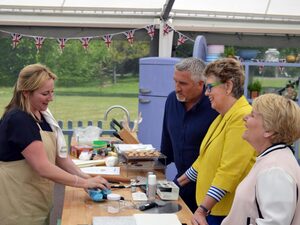 This is one of those weeks ye could normally have missed in previous seasons; simply because most bakers won’t do biscuits.

I’ll do shortbread and the odd tray bake, and that’s about the height of it for stuff you’d carry in your mouth on route from the Kitchen to the Front room.

Biscuits are quick but can mess up too easily; and, well the main reason for me anyway, and I suspect many others might recognise this, is they use up too much kit and take over the place – there’s too much faffing about with baking trays and timers and 8 minute bakes; and you never have enough cooling trays.

And they’re can be an’awful lot of piping if like me you’ve no patience for sizing and straight lines. And they’re gone before bedtime.

So last night was a pleasant surprise. If you are one of those that would have given Biscuit week a miss, make sure you pick it up. The Technical was something I never would have expected on GBBO, and it introduced us to a technique we never would have put our own thoughts to.

The Recipe of the week to follow up on is Stacy’s Signature Bake especially the Marshmallow Fluff filling which could be handy for a load of stuff.

I’m not afraid of saying now that I don’t miss Mary Berry, yet I don’t feel disloyal or that I’ve cheated on her because she hasn’t actually been replaced. Prue Leith has established her own role in the Bake-Off tent and with the Bake Off itself.

Instead of replacing Mary Berry, Prue now has her own individual partnership and relationship with the Hollywood and the viewers that is totally independent of Mary.

I’m actually really looking forward to seeing how she accompanies Paul on Bread week (next week btw) Mary had a tendency to let Paul be her teacher on Bread and Pie stuff; so will Prue be as willing to let Paul lecture her and the remaining Bakers?

If anyone still had any doubts about Sandi and Noel; they must be well steamed off by now. They own that gig. In fact, I think the process of developing a whole new audience and market for themselves outside their usual genres is well underway.

Because they are so unique themselves they are creating a string of new dynamics for Bake Off. With the Bakers, with the Viewers, with Paul and Prue, with themselves; whereas Mel and Sue were, despite being a Double Act, one blonde one brunette etc, one straight one not, were actually just a single and same role to cast; same lines, same wardrobe, same gags.

Totally unlike what Noel Fielding and Sandi Toksvig are filling the tent up with.

Finally, no dispute about who went home; but I would have challenged Star Baker meself. Having said that the Liverbirds won’t have worried anyone last night; but then again it was just bikkies; however, the Scouse Girls are still the ones to watch.

Previously: And How Was It For You?

12 thoughts on “Taking The Biscuit”