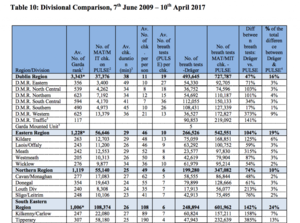 An Garda Siochana published their internal investigations into the fake breath test figures and the 14,700 wrongful convictions for motoring offences.

They can be read here and here.

Meanwhile, the Policing Authority has hired financial auditors Crowe Horwath to conduct its own independent investigation into the matters and that’s expected to be completed by September 25.

It’s been reported that Garda Commissioner Noirin O’Sullivan is due to appear before the Policing Authority three days later on September 28.

Minister for Justice Charlie Flanagan released a statement yesterday about the Garda’s reports into inflated breath tests and the fixed-charge notice system. He said he was disturbed by the findings and expected the reports to be published later in the day.

But Garda Headquarters never had any intention of publishing the reports any time soon. It wanted to wait until consultants hired by the Policing Authority to examine the same issues had completed their work.

But the Garda has now been forced to go public with the reports because Mr Flanagan, in public, told Ms O’Sullivan she had to publish yesterday.

And if the Policing Authority’s consultants find anything nasty that the Garda reports overlook, it could be the end of the road for Ms O’Sullivan.

Previously: Another Half A Million

‘Our Members Will Not Be Scapegoated’

The Tribunal Wrote To More Than 430 Officers. Two Replied With Relevant Information.

4 thoughts on “Fake Breath Tests In Your Area”