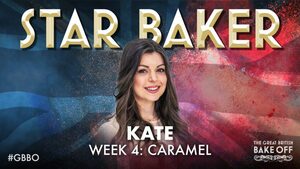 Episode 4 of the Great British Bake Off on Channel 4 contained a naughty centre last night.

Caramel week is a Bake Off first, but throwing in a different theme among the standard fixtures; Cake, Patisserie, Bread etc is not. So I was looking forward to it myself, in particular the voyeur’ing over the making of 40 shades of Caramel from scratch; sur’ the rest of us just take it out’ve a can.

But here, I was all but gagging on the buttery molten sugar before they even got to the Show-Stopper. I could feel the fumes from that dark muscovado smouldering up my own nostrils.

For a Bread, Pie and Pud man The Hollywood has some sweet tooth and obviously a gut that can cope with a plantation of sugar.

What I did appreciate in particular last night was that the makings of the Signature, Millionaires Shortbread, is pretty much in every home baker’s kit and skill level. There are loadsa of ways to get started with Millionaires Shortbread. So give them a go. All the kit you need is a bowl, a whisk, a tray, a pot and a can opener.

Interestingly, the Technical brought its own first as well, they all made a Mickie of it. Actually, this is a good spot to get the stickie bits out’ve the way.

It must be an’ Irish thing but Prue’s “Go Low & Slow” over that very segment got a knowing sur is there any other way Girl, yet it didn’t feature in the on-line post-mortems hash tagging around. Lots of “Dip me Nuts” and Stacey’s “not as much as an erection as I would like” tho.

Again, with Stacey, and her Show-stopper; forget the erection section, sur it’ll only wilt anyway, her Chocolate & Coffee Carmel Cake is definitely one for me so I’ll be looking for that recipe. All the hoo-haa was for Kate’s Sticky Toffee Apple Cake and deservedly so.

But tis all that buttercream lads, not a fan meself and its messy enough over the day or two after (if you manage to get that out’ve it) and there’s loads of ingredients involved, and some you may not be able to pick up on the way home.

Whereas a good coffee sponge does do well in a tin – add in Chocolate & Caramel and you’ll be winning everything from Tinahely to Tullamore.

Shurt watching now appears to be a thing on Bake Off. And it all started here on the Late Late Broadsheet on the Telly show.

Finally, despite the Twitter meltdown about Star Baker, Kate who can now longer be snuck in as my ‘Dahk Hoarse’ was worthy and has served her time being there and thereabouts consistently.

While Liam did get the only Hollywood handshake last night, readers and watchers need to be reminded he barely survived Bread Week. I also sensed some sense of entitlement off him in the final stages of last night’s show; and its put me right off.

Next week is Pud week. They’re a bit like biscuits for me, too much hassle for a short-lived experience; despite the steamy atmosphere. And I’m a bit funny about suet; I even make my own Mince-Meat at Christmas without it. But looking forward to it anyway.

46 thoughts on “Getting Sticky”