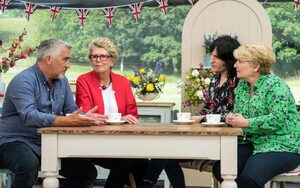 it was pudding week!

I know last week I kinda dissed puddings a bit, but I’m opening up this week with a complete backtrack. I’d forgotten how easy the prep is and how much fun you can have with them, and how cheaply they can come together with the few bits that might already be in ye’re presses.

Some of ye may have noticed already that I don’t mention my own mother very often, that tis usually her mother, my Nanny Lulu that features from time to time; she’s still alive but we’re not close and would probably qualify as estranged. I have no regrets about this status or suffer any guilt over it.

But it was my mother who was the baker I grew up with.

The only thing I’ve asked from her in the last 10 years was for her recipe books and notes, at the time there was only one hand written one I was explicit about;

A Christmas Cake recipe in the most beautiful graceful handwriting I have ever seen; still. It came into my mother’s collection by way of my sister’s best friend, and my babysitter for years Trisha.

Anyway one year my older sister was charged with doing the Christmas Cakes (it could have been a few years as my mother worked nights – I’d say t’was mid to late 70s anyway), and Tisha came by to sort it out; poor ol’ JackJack still can’t manage to re-heat a shop bought Apple Tart, but she’s an American how, so she probably gets them delivered. (If it’s of any interest I have contacted JackJack just now to get her to confirm how that recipe ended up with us and how it came about that Mam didn’t bake them herself – so a TBC sticky in this paragraph please.)

I digressed here because Mam was, when she was about, a committed and studious home baker. She sourced ingredients and kit from my aunts still in England pretty much from every call and letter between them. And what she did most and best; Steamed Puds.

Although not actually steamed like you saw last night; she used a Pressure Cooker. And in that collection of recipe books is a book with 365 Puddings in it; one for every day of the year.

My 10 year old’s memory thinks it was a St Michael’s Marks and Spencer one. But she had loads of their books, so I won’t let ye rely on it. But with every bake session there was always a few puddings done too.

Interestingly for me now, and hopefully for ye. A steamed pud will keep for weeks if its kept in the bowl its baked in and the greaseproof paper seal and top remains intact. Mam would even leave the string still on, and when it was cold wrap a tinfoil cloak around it.

So, why am I telling ye all this. I was wrong about Puddings. Maybe it was an unintended blocking out of them based on my own relationship with the woman that taught me how to make Queen Cakes and turn them into Butterfly Cakes. I dunno. I don’t care;

Give one a go; try a sweet one first and don’t get too fancy with fruit and compote and curd n’stuff. Just put your favourite jam into the bottom of your pudding bowl and pour your sponge mix slowly over it. I’m sure there’s enough YouTube vids up there to teach ye how to seal and tie up a pudding bowl before steaming.

At last, Back to Bake Off; and apologies for taking this long. What I really enjoyed about last night, was that every challenge, Signature, Technical and Showstopper can all be attempted by a first-time baker.

In particular the Showstopper, OK not quite the ones we saw last night. But a tiered dessert is so easy to do, and its great if you have smallies wanting to help. A loaf tin, cling film, some fruit covered in an inch of jelly. Set it. Mix up a layer of Ice cream or custard or mouse or even yogurt and pour over your now set Jelly.

Next, crushed brownies, cheesecake base, trifle sponges, even slices of Swiss Roll; anything. See that, everything there now can be shop bought in the shop across the road. No baking or measuring or weighing or sifting. You won’t even need an apron.

Recipe of the week is not what ye might be thinking because it mentioned a certain gentleman known to us all here. Christ, I couldn’t even think of him and that pond together with Earl Grey tea. I’m holding back my throat now thinking about being forced to drink hot water with washing-up liquid in it.

I’m going to recommend Steven’s Lemon Pud although I’m going to swap out the Blackcurrants for Blackberries or Blackberry Jam. If any of ye have access to any Country Markets, now is the time to get a few jams in to get yere puddin’ on.

No daycent smutty stuff worth bringing to ye’re attention, nor any shurt talk that would be of any interest. As predicted, the new faces in the tent, Prue, Noel and Sandi are fully embedded into the Bake Off; and they did it without stepping on anyone’s toes or by overlooking the tradition and legacy started by Dame Mary Berry and the other two, Mel and Sue. Yeah I know but she should be.

Three Hollwood handshakes in the Signature last night; a record. But only two of the recipients were in contention for Star Baker, Stacey and Yan, who ran alongside Sophie in that final decision.

Sophie who in all honesty was up there at that level for Cake week and Biscuit week anyway, and will be a finalist imo. So, it was well earned and well deserved to final breakthrough into Star Baker.

Now to who went home, James. Ah here t’was only a matter of time anyway. And he was the only one on that step last night.

Next week is Pastry week. And ye all know too well that pastry is an art form all on its own. And no matter how many times we follow the same recipe there is always something different about each outcome.

I’ll be looking for some new tips and techniques meself, and hopefully I can get finally figure out Choux.

It’s still all to play for. The best last 7 ever and if Yan can survive Pastry week, I think Patisserie could be right up her street, and we might just have another new contender for Season 8.

Oh, and what happened to all those Recipes, my mother gave them all away to my father’s niece. Along with all her kit.