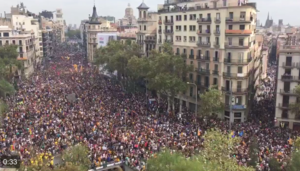 Catalans are taking part in a general strike called after a police crackdown during Sunday’s controversial independence referendum.

In Barcelona, metro stations were closed, main roads were blocked by pickets and civil servants walked out.

Tens of thousands took to the streets in protest to Spain’s response to the vote, which was deemed illegal by Madrid.

“I’ve Never Seen Anything As Stupid In My Life”

20 thoughts on “Meanwhile, In Barcelona”