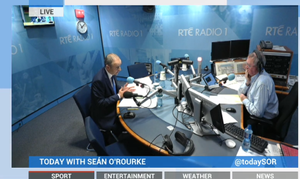 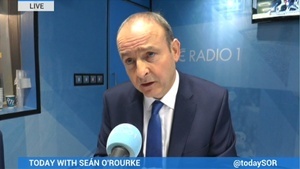 Further to Fianna Fail tabling a motion of no confidence in the Tanaiste and former Minister for Justice Frances Fitzgerald which effectively breaches the Confidence and Supply Agreement.

The party’s leader Micheál Martin spoke to Sean O’Rourke this morning on RTE Radio One.

Sean O’Rourke: “So is there no going back now from the collapse of this government? Because you’ve torn up the Confidence and Supply Agreement.”

Micheál Martin: “Well we haven’t. This is a very core part of the agreement. Where there is an issue that causes a threat to the Government, there’s a specific clause within the Confidence and Supply Agreement which allows for the two leaders to engage on that issue. And I did that on Wednesday. I rang the Taoiseach on Wednesday and said, you know, I’m invoking the Confidence and Supply.

“There’s an issue here that will threaten, in my view, the Confidence and Supply Agreement and the Government. It has to do with the Tanaiste’s knowledge of a campaign, a legal strategy, to undermined the character and integrity of Maurice McCabe. It’s a very fundamental issue that goes to the heart of justice for every citizen in this country. Not just Maurice McCabe. It’s broader than that.

“And the State, in my view, should not, in any way, be complicit in undermining a man’s character or indeed his integrity, particularly on bogus grounds and the minister is aware of that at the time and choose not to act. Now I went, I spoke to Leo Varadkar, I indicated that we could no longer have no confidence. I didn’t publicise, I wanted to give him space and time.

“He said, could I come back to you? I said, you can. But the following day, that was yesterday, he didn’t come back. I did initiate contact again through our Chef de Cabinet with his special advisor and I then made contact by, I then had to phone, I didn’t text him, we spoke…”

O’Rourke: “This was a second conversation?”

Martin: “This was a second conversation yesterday which didn’t  come to a conclusion which didn’t, basically, he’s of a view, he’s saying that Frances Fitzgerald did nothing wrong. But the whole situation is so unsatisfactory because I made the point to him: look, Alan Kelly asked some very basic questions, right? If you look at the replies, I’d invite people to study them.

“Basically, the answers were avoided by those replies…avoided...”

Martin: “I think Alan Kelly touched a raw nerve there. This documentation surfaced. There was people dithering around with him for 10 days. It’s extraordinary that that documentation never made its way to the Charleton inquiry [Disclosures Tribunal]. The Dail is misled on a number of occasions, and basic trust breaks down when something like that happens and basic trust and credibility about how this issue has been handled, but fundamentally goes to the character of Maurice McCabe and the attempt on…”

O’Rourke: ” [talk over each other]…in a few minutes. I just think the latest thing in from Martina Fitzgerald, our political correspondent quoting Government sources, saying the Taoiseach Leo Varadkar has issued an open offer to the Fianna Fail leader Micheal Martin to meet to discuss the ongoing crisis. Now, Regina Doherty told us that offer has been there for the past 24 hours. Why didn’t you take up the opportunity to meet face-to-face?”

Martin: “Sorry, I made it clear to the Taoiseach, I had no difficulty in meeting him last evening. And I made that clear to him…”

Martin: “We had a discussion, we did not agree. We have to agree to disagree on the core issue. I’ve no difficulty meeting with the Taoiseach in relation to this but he knows our position. We don’t want an election.  I made that clear in the phone call to him.”

O’Rourke: “But you have caused an election..”

Martin: “No, sorry Sean, we haven’t. And let’s be very straight about this, there was a big failure here to stand by the character of Maurice McCabe. To allow state agencies essentially to go and essentially…”

O’Rourke: “What do you know now about Maurice McCabe and Frances Fitzgerald’s state of knowledge or action or inaction…

O’Rourke: “No, no..that you didn’t know two years ago or even one and a half years ago?”

O’Rourke: “When Mick Clifford and Katie Hannon had revelations about the events and the exchanges in the O’Higgins Commission, everybody was aware of it at that stage…”

Martin: “Nobody was aware, in terms of that, no one knew that the Minister knew at the time, in advance of the legal strategy being prepared. I mean it was a notification went around, basically saying to the minister, the secretary general, to the assistant secretary, and others, that the Garda Commissioner is now advancing a legal strategy to undermine the character and integrity  of Maurice McCabe.”

O’Rourke: “Even if they did know…”

Martin: “Can I also say, Sean, this, I had all this with Tusla as well. Now my patience has been stretched on this issue. And I’ve been involved with it for quite some time. It was I who led to the establishment of the Guerin report by bringing that dossier into Dail Eireann and showing it to Enda Kenny, detailing serious malpractice with An Garda Siochana.

“That then, by the way, that report said Maurice McCabe was a man of strong character and integrity. I believe Mr Guerin put that in for a reason. It then, he recommended the  O’Higgins report and  that happened. It was never meant to be an adversarial engagement. It was meant to be inquisitorial…”

O’Rourke: “You’ve known since Katie Hannon’s revelations that that was the thing being adopted…”

Martin: “The adversarial nature of it became known in May 2016 but we didn’t  know the Government was complicit in it.”

One Man’s Lobby Is Another Man’s Foyer

‘We Owe It To Make Sure That Justice Is Done’