The warning is relevant from Saturday at 11pm until Sunday at 11pm.

“Significant falls of snow are expected Saturday night and into Sunday.

“Accumulations of 4 to 8 cm could occur quite widely with greater totals possible. Drifting snow locally at times too with brisk winds.

“Slippery paths and treacherous roads also due to snow accumulation and ice.”

Meanwhile, Met Eireann meteorologist Siobhan Ryan has just described the impending snowfall as a “dumping of snow” as opposed to a “scattering of snow” on RTE’s News At One.

Met Eireann has this afternoon issued a temperature warning for the whole country tonight, stating temperatures will fall to between 0C and -4C.

Was in town last night on what must have been the coldest night this year. Spoke to 3 homeless young people (but saw at least another 3) who were bedding down for the night. Why are cold weather beds NOT AVAILABLE until Dec 16th??? @MurphyEoghan #MyNameIs @campaignforleo 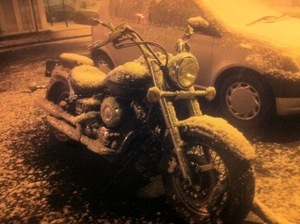 It Came From The Sky

Here’s That Winter You Were Expecting 5 thoughts on “Incoming: A Snow Dump”