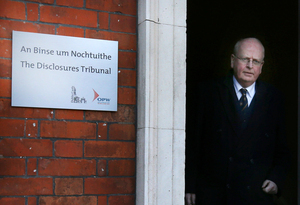 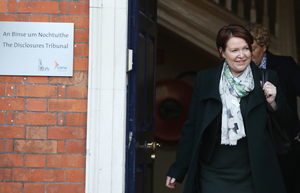 Former Garda Commissioner Noirin O’Sullivan has been giving evidence to the Disclosures Tribunal for the past two days.

As of 10am this morning, when she returns to give evidence, she will have given around eight hours of testimony.

Her exact knowledge at certain points in time and on certain matters remains a little unclear.

Readers will recall how a Ms D made a retrospective ‘humping’ complaint in December 2006, 11 months after her father, a guard, Mr D “lost his position and was reverted to other duties” after Sgt McCabe “caused the institution of serious disciplinary procedure against” Mr D in January 2006.

After the DPP investigated Ms D’s complaint, its directions included the line:

Ms O’Sullivan was asked by Kathleen Leader BL, for the tribunal, if she had “prior knowledge” of the Ms D allegation at the time some gardai – including Supt Noel Cunningham and Chief Supt Colm Rooney – were holding consultations with their, and her, legal counsel ahead of the O’Higgins Commission of Investigation on May 12 and May 13, 2015.

The tribunal has heard it been claimed by several witnesses – including Ms O’Sullivan’s liaison officer Chief Supt Fergus Healy and solicitor Annemarie Ryan, of the Chief State Solicitor’s office – that these consultations largely gave rise to the contents of Chief State Solicitor’s letter which was produced to the O’Higgins Commission of Investigation on May 18, 2015.

The tribunal has also heard that this letter outlined several occurrences which actually never occurred.

In particular, one specific claim that at a meeting in August 2008 Sgt McCabe conveyed he wanted to “force the hand” – in a blackmail-like scenario – of a superintendent to give the DPP’s directions to the Ms D family., after Sgt McCabe was publicly confronted by Ms D and Mrs D in October 2007.

This was proven false by a tape recording of this meeting with two gardai including Supt Noel Cunningham.

The tribunal has not heard oral evidence from Supt Cunningham, retired Chief Supt Rooney or any of the members of Ms O’Sullivan’s counsel at the commission about the sequence of events yet.

But returning to the Ms D allegation…

And Ms Leader’s question about her knowledge of the Ms D allegation in May 2015.

“Yes, my understanding would have been limited to — I mentioned in my opening that back in 2008/2009 I was an assistant commissioner in Human Resource Management. At that time, these incidents actually, the allegations in relation to the malpractice in Bailieboro, had already started, and I was presented on my, I think my first day back in Human Resources, with a minute from Mr. Costello — or, sorry, a minute to go back responding to a minute from Mr. Costello in relation to those matters.

And to apprise myself of what I was dealing with, I sought and obtained a report from Chief Superintendent Terry McGinn, who had been dealing with a number of the issues raised by Sergeant McCabe, and contained in that document is a reference to the Ms. D allegation. “

“It’s, I think, from my memory it’s about a seven- or eight-page document and the reference is probably about two paragraphs…. No, Chairman [when asked if she would have looked at the investigation file at any time] and I would have no need to or no reason to…I knew who — not who Mr D was, but I knew that it was relating to a colleague, a colleague’s daughter, and I also knew that the DPP had directed upon it and that there was no basis for a prosecution.”

Ms O’Sullivan, in her response to Ms Leader, makes no reference to a rape allegation.

But Ms O’Sullivan also acknowledged to Michael McDowell SC, for Sgt McCabe, that she knows she got a referral about Ms D and Sgt McCabe from then Assistant Commissioner Kieran Kenny in May 2014.

However, she has “no memory of reading it”.

The tribunal has already heard Mr Kenny sent this to Ms O’Sullivan on May 16, 2014.

The tribunal has also previously heard that Mr Kenny, after receiving a corrected referral, never sent this on to Ms O’Sullivan.

Yesterday, Mr McDowell specifically asked Ms O’Sullivan if she was ever told this referral was incorrect.

Mr McDowell then put it to Ms O’Sullivan:

She replied: “That would be correct, Chairman, yes.”

So was her knowledge of matters – in May 2015 – that Sgt McCabe stood accused of raping a child?

And if this is incorrect, and she in fact knew, at that point, that the accusation of rape against Sgt McCabe had been an error, in the interest of doing what she wanted – which she has repeatedly stated was to put all matters of interactions between Sgt McCabe and senior gardai in Cavan/Monaghan before O’Higgins – would this have been something that she should have flagged with her counsel?

The tribunal has heard that Asst Comm Kenny and Ms O’Sullivan held a meeting with Sgt McCabe and his solicitor in August 2015 about his welfare and workplace issues.

Sgt McCabe was told nothing of this false rape allegation.

Sgt McCabe didn’t learn of this false rape allegation until Tusla sent him a letter – incorrectly claiming they were investigating him for rape – on December 29, 2015.

The tribunal has also already heard that on May 16, 2014, Ms O’Sullivan’s then private secretary Supt Frank Walsh, on receipt of this incorrect rape referral, replied to then Asst Comm Kenny, saying:

”I am directed by the Commissioner to refer to previous correspondence from your office of 16th May 2014 in the above and to inquire on the current status of the matter.”

So it would appear there was an active effort on the part of Ms O’Sullivan, via Supt Walsh, to keep informed of what was happening in regards to this incorrect allegation of rape – something Ms O’Sullivan seemingly believed was a true allegation.

In the summer, the tribunal heard there was no further correspondence about the matter and the false rape allegation remained on file in the Garda Commissioner’s office until early 2017.

Readers may wish to also note…

The tribunal has previously heard in evidence given by the Head of Legal Affairs at An Garda Siochana Ken Ruane that the Attorney General’s Office was involved in appointing Kieran Mulvey as an external mediator to help with Sgt McCabe’s workplace issues in March 2015.

The tribunal has also heard Chief Supt Fergus Healy, who was the liaison officer for Ms O’Sullivan at the O’Higgins Commission of Investigation, say he told Ms O’Sullivan on the evening of May 15, 2015 that “the Attorney’s office were keeping a watching brief, from a
distance, on this”.

He elaborated: That is, in a nutshell, what I had kind of said to her. I had told her that there was a watching brief being kept on this, from a distance, by the Attorney’s office, words to that effect.”

Asked how he knew this, Chief Supt Healy said: “I was inside in the Commission and I think Ms Ryan had mentioned it to me…”

Much has been made of the seemingly conflict between Ms O’Sullivan’s public stance of support for Sgt McCabe versus the legal instructions taken on her behalf towards Sgt McCabe at the O’Higgins Commission of Investigation.

But does the Attorney General’s office also have questions to answer?

Olga Cronin will be tweeting from the tribunal today. You can follow Olga here