I received a phone call yesterday from the office of The Lord Chief Justice in Belfast regarding comments I had made on Broadsheet.ie. I was asked if I had a lawyer and I was told that I am liable for arrest.

I was instructed to contact Broadsheet to take down any reference to myself in regard to the ‘Ulster Rugby Rape Trial’ – I was the foreperson on the jury. Broadsheet reacted momentarily to comply.

I had a series of phone calls and one email from the Lord Chief Justice’s Office. I did ask: where did the complaint originate? I was told The Irish Times.

I called The Irish Times last night and spoke to a reporter who confirmed this.

The comments I made referring to the case were within the parameters of the judge’s discharge to all the jurors. The one thing she said was: “Do not reveal conversations or discussions that occurred in the jury room.”

Following my comments on Broadsheet, there is now an order, delivered to me yesterday, by  Judge Patricia Smyth QC, for the jury members to not comment on this case at all.

I will, of course, abide by this, but hope to keep contributing to Broadsheet on other subjects. 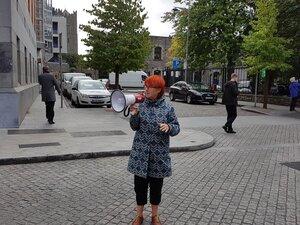 Meanwhile, At The Children’s Court