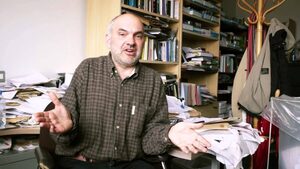 Harry Browne, lecturer at the School of Media at Dublin Institute of Technology

…media (like healthcare) have a capitalism problem, and that everything from fake news to clickbait to inadequate investigative resources to Denis O’Brien flows from that basic source. But you don’t have to agree with me and name the underlying problem as capitalism to understand that there are structural causes for crises such as the one that erupted recently over Government ‘advertorial’.

“I believe the Government is attempting to exploit the difficulties many local and regional titles are facing to promote their party interests”, said no less a media critic than Fianna Fáil’s Timmy Dooley, the party’s spokesman on communications. (How sweetly old-fashioned that word ‘communications’ can sound as it grapples with the changing world.)

Media literacy, if it is to be of any use, has to do more than implore us to look for the little ‘special feature’ tag on the top of a piece of paid corporate or government puffery, then to regard the ‘journalism’ below with due scepticism.

It must mean understanding ‘the difficulties’ for all journalism that operates in the current market, especially one in which technological change has accelerated existing trends toward blurred lines, and in which advertisers have alternatives to local and regional newspapers when it comes to reaching eyeballs.

If the most poignant aspect of that brief, quickly snowed-under ‘Ireland 2040’ crisis was the image of the Taoiseach issuing guidelines for labelling advertorial content – guidelines of which the most callow intern in a local newsroom should surely already be aware – we shouldn’t lose sight of the fact that media have been operating at the edges of such guidelines for decades, for the benefit of advertisers looking to buy a little ersatz editorial credibility. How can this fail to be a lesson about how fragile, at best, any such credibility has become ?

As the media may or may not have told you, global research shows trust in media is in tatters – media are less trusted than governments, NGOs, businesses – and Irish people are at the mistrustful end of the distribution. In this context, media literacy can hardly consist of legacy media saying ‘trust us, not them’.

What can be done ? (Yes, short of getting rid of capitalism.) Anyone who has worked in a newsroom knows what a frightening prospect it would be to try to earn the public’s trust with transparency and accountability about our editorial practices.

On a daily basis, contingent and incomplete information is transformed into definitive statements of ringing certitude. That’s one sausage factory we don’t want you to see inside, especially since the work often consists of sticking our label on someone else’s meat.

The irony is that the technology often over-simplistically blamed for creating the journalism crisis has long offered tools for remarkable transparency, tools that most journalists have chosen to use only in limited ways…

It Used To Be Such A Nice Village