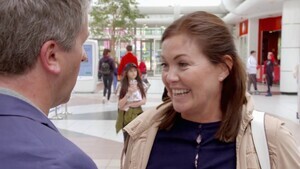 From top: A scene from RTÉ’s What Are You Working For?; Eamonn Kelly

The Phillip Boucher Hayes documentary What Are You Working For? Screened on RTÉ on April 9 demonstrated that the jobs being created in recent times, particularly low paid jobs are not only not achieving what they were supposed to achieve – more funds in the tax net – but are apparently designed in such a way as to deliver neither security or a realistic living wage to those who hold such jobs.

They are in a way McJobs; all appearance and no sustenance.

Early in the programme Boucher-Hayes asked one of the participants, a low-paid retail worker, if she would be better off not working. This is an interesting question and something of a trap in a way, though there is no suggestion that it was intended as such.

To be better off not working alludes of course to the welfare system and the case is then usually made that welfare is too “generous” if some people can only be marginally better off by working.

The participant in this case was working part time in retail, earning €15,000 which left her tax free and also eligible for state supplementary benefit. But the period of entitlement to this state benefit was coming to a close, leaving her in a situation where her weekly earnings did not cover living costs.

It used to be called the housing ladder, but the homelessness crisis has created a new sub-zone requiring a new ladder. Soon we’ll have people struggling to get on the first rung of the deep-black-pit ladder.

The Irish retail worker the RTE documentary, when asked would she better off not working, said that she was earning €15 more for her 15 hours than she would earn if she went on welfare, which she refuses to do because she doesn’t want to take handouts from the state, despite the fact that she is working in a job that doesn’t actually cover living costs.

She went on to say that claiming welfare would set a bad example to her children, and adds:

“They need to have that self-worth to get out there and earn their own money.”

This is a sentiment we would all agree with, and one that is often made by low-paid workers who take pride in asserting that they could not and would not take state “handouts”. It is interesting too that the concept of self-worth is often factored into such sentiments as a quality only deliverable by working in a “job”.

But the idea of “getting out there” and earning “your own money”, while admirable in its fighting intent and moral chutzpah, takes absolutely no cognizance of the realities of finding decently paid occupation in a system seemingly deliberately designed to minimize worker’s benefits and protections.

To have a concept of personal self-worth tied into and dependent on success in such a system seems almost tragic.

These decent, moral qualities expressed by this woman are unfortunately just more sustenance for the dinosaur-like corporate entities roaming the planet. They’ll eat that stuff up all day. It serves them to have moral, honest hard-working people playing by traditional rules and moral codes.

Have you ever heard a multi-national corporation declare that it was too proud to accept state handouts? Corporations take all the handouts they can get and actually have systems in place to trawl the globe looking for state handouts.

They’re no mugs, that’s why they command all the wealth. That’s why we have so many multi-national corporations here in Ireland, and the majority of them are US vampire-like companies who parked their gargantuan arses here, tax free, to avail of state handouts, in exchange for “jobs” they would provide.

But the concept of “job” in this Faustian pact has clearly come to have two separate and distinct meanings for the parties involved.

The state may understand a “job” in the old-fashioned way of an occupation in manufacturing that delivers decent wages to its workers which will filter back into the local economy and into the national tax base in terms of income tax, VAT and so on, with the rising tide lifting all boats and so on. This understanding of “job” is predicated on the assumption that “jobs” are by their nature, well paid, a dangerous assumption as it turns out.

A multi-national company however may view a “job” in an entirely different way. If for instance a company is entering a deal of job provision in return for a tax-free base allowing access to the lucrative European markets, it may create as many jobs as you desire.

But don’t expect them to be “jobs” in the sense you understand the concept. Expect them to be occupations involving the use of the time and labour of local individuals in a setting that looks like the type of setting you assume a “job” belongs in.

A place owned by the employer that provides some service or other and which pays a minimal wage to an employee who is kept there against their natural inclination by the traditional moral imperative of getting out there and earning your own money.

But if this “job” doesn’t pay enough to contribute to the tax base and the local economy, as was the case with all of the low-paid jobs featured in the RTÉ documentary, almost 400,000 of them, it is not a “job” in the sense in which you understood when you entered into a tax-exemption deal with multi-national companies in return for the creation of “jobs”.  They’re jobs, Jim. But not as we know them.

Such jobs are deliberately designed to be precarious, particularly jobs created by the US companies who have decades of experience in feeding off workforces as if people are just so many tubes of toothpaste to be used up and discarded.

The effect of engineering precarious employment is to destroy the concept of unions and worker protections and to leave individual workers bearing the costs of creating employment while the corporation takes all the profit.

This creates a situation where the projected tax take from increased employment that was understood as part of the “job” creation deal doesn’t materialise.

Everyone is working, but everyone is losing except the corporations. And that’s the way it is arranged. Workers can never win. It’s like gambling in a casino. The games are rigged. The house always wins.

So, what’s being taken from people, in real terms?

Their time. Their energy. Their skills. Their education. Their autonomy.

Here’s the IDA’s sell of Irish workers to lure foreign companies to Ireland.

These qualities are assets and are being sold on the international market by the government to lure so-called foreign investment.

But if the workers then hired in the deal of tax breaks and an educated workforce in return for “jobs” are then essentially cheated by these companies by being hi-jacked into precarious employments, as was demonstrated on the RTÉ documentary, it is clear that the initial deal is being poorly misunderstood by the deal-makers in government.

It’s a bad deal that fails to achieve what it set out to achieve, leaving Irish people essentially footing the bill for multinational profiteers, whether through low wages and the sacrifice of their skills to the cause of the multi-nationals’ business priorities, or by paying tax for social services some of which will supplement the living costs of the impoverished workers who are simply not being paid enough to live on and must resort to welfare top-ups.

Many short-term contracts create a situation where workers are on permanent call at the whim of the employer. Such a situation has further hidden costs in basic human needs and the effect on family relationships. Plus, you can be sure there are people who are simply not sleeping as much as they should for best health, and not eating properly.

These too are costs paid by the employee that directly enhance corporate profit while incurring health deficits that will inevitably mean future costs on the health service as over-worked people’s health breaks down. Costs which will again be paid by the Irish tax-payer.

All these “assets” are being turned to capital by the multi-national companies invited by a government still essentially exercising the tricks of the Lemass era.

It even could be that this ongoing dependent behaviour on multi-nationals to do our job creation for us has left our governments relatively guileless in the ways of business, and now prone to cutting deals that are damaging in their naivete.

Though I’m not sure the Irish establishment is that naïve. It’s more likely and fits more with anecdotal evidence and personal experience that they simply have no real respect or esteem for the native citizenry.

The way these multi-national companies operate is a bit like strip-mining the human workforce. All the skills, talents, qualifications and experience are turned over to the companies by the government in the interest of “job” creation.

But the “jobs” created are immediately stripped of profit by systems already in place and the workers and all their assets in the form of education and skills is immediately turned into a kind of human pulp from which the companies crush time, expertise, labour and fundamental health into profit for the company.

These profit-harvesting machines create wastelands of people and places, like those desolate US urban spaces you see on Louis Theroux documentaries where junkies roam like zombies until such time as they step foul of the law and are washed and dressed in cotton whites and consigned for life into fridge-like cubicles in privately run prisons where, in their permanent captivity they still miraculously generate profits for private companies.

This pact of tax breaks and selling off an educated workforce to multi-national companies in return for “jobs” is not only a poor deal, it also seems like an ongoing statement of a national lack of self-confidence. An Achille’s heel that is being mercilessly exploited by international profiteers.

All the creativity of a highly educated workforce is being burnt up to serve the production really of multinational company profits, with skilled people being pressed to take “proper jobs” that are often a waste of their talents and that are so poorly paid that they don’t qualify to contribute in any meaningful way to the tax base.

I came across an article recently where someone said of the US job market that wonderful art works are being lost because the artists and musicians are being pressed into low paid employment flipping burgers and so on. The same is happening here because the same principles and the same players are being let loose here too.

The talents and qualifications being wasted in the service of these companies is also a loss of potential real capital, since it has been demonstrated in study after study that the arts are a huge source of income to any country and are of particularly lucrative potential here in Ireland where the native talent is the envy of more culturally sterile but wealthy countries, like Germany for instance.

In the long-term, raw creative talent will not achieve its potential, because its energy and gift is being squandered to serve the creation of corporate profits for minimal benefit, in the name of the creation of an old-hat understanding of “real jobs”.

The waste of native talent in exchange for McJobs is tantamount to a crime against culture. A dated initiative for job-creation that is selling us all out and burning up future potential in exchange for nothing really, except a statistical boast for a government who then claim a raise for a job well done.

If you demonstrated the tax-breaks for jobs deal in a kindergarten with squares of chocolate, the five-year-olds would look on with total derision at the obvious cheat of it all.

38 thoughts on “Strip Mining The Workforce”