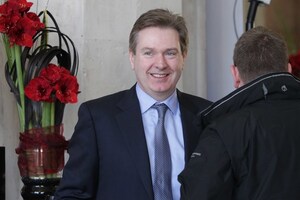 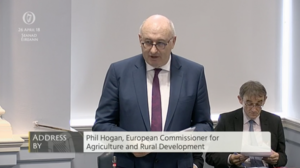 Former Fine Gael Minister for the Environment and Carlow/Kilkenny TD Phil Hogan – who became the European Commissioner for Agriculture in September 2014 amid a string of controversies at the time – addressed the Seanad.

Readers may recall how one of these controversies concerned an Irish Daily Mail front page story in 2012 about how the then Environment Minister had written to some of his constituents in Kilkenny, telling them a Traveller family – Patrick and Brigid Carthy and their seven children – would not be moved to a house near them.

Phoenix magazine later reported that former Irish Independent journalist Eimear Ni Bhraonain had the story for 10 days before the rival paper but her editors held off from printing it and only did so when the Irish Daily Mail was on the verge of publishing it.

During his address to the Seanad, Mr Hogan spoke about “fake news” and praised the Group Editor-in-Chief of Independent News and Media Stephen Rae who was recently appointed to the European Commission High Level Expert Group on Fake News.

Mr Hogan was speaking about Brexit when he praised Mr Rae.

“The EU institutions have been shaken from their slumber. It is noticeable that there is a new energy and a new desire to get things done. In a world of rising nationalism and retrenchment, the EU is occupying the space that has been vacated by others to lead from the front across multiple policy areas.

“The EU is now the unquestioned global leader in promoting open and fair trade that is based on rules. As the Cathaoirleach mentioned, in the past two years we have signed important new deals with Canada, Japan and Singapore. Earlier this week, I was delighted to announce an agreement with Mexico.

“Many of these deals are immensely positive for our agrifood producers and our pharmaceuticals and financial services sectors. This is very good news for Ireland. Size matters in trade. As the world’s leading trading bloc, the EU is in a position of strength to build mutually beneficial agreements with our global partners.

“We are driving the global agenda on climate and sustainability, which remains the single greatest challenge of our time. This country urgently needs to step up its contribution to meeting this challenge. We are trying to relight the flame of Europe’s enlightenment values by making truth and reason relevant again in a world of mistruths and fake news.

“Again, Brexit is important in this context. EU membership was a successful policy in the UK and was accepted as such by the majority of politicians and commentators. That did not stop a majority of people voting to scrap it. That is strange because one thing the Brexit story has shown is that the UK does not – by a long shot – have an alternative policy to EU membership.

“Even Brexiteers are happy to keep one foot in the EU, for example by continuing to participate in security and transport agreements and certain EU agencies. The fact remains that people in the UK voted to leave. As politicians, we might think successful policies always commend themselves, but that is not always the case.

“Successful policies need to be defended, articulated and communicated. Brexit has taught us all a sharp lesson in this regard. We need to understand this and incorporate it into our political lives as part of our stocktaking. We cannot take it for granted that people will vote for the EU, or like the EU, just because it happens to work.

“As I mentioned earlier, this has been a wake-up call for the European institutions. We have to look at how we can do things better in this regard. That is what we are discussing with member states and, through them, public representatives and people. Perhaps we can go a stage further by asking how everyone failed to spot that a disconnect was arising between citizens and their representatives.

“This disconnect dominates so much of our politics today. How did we allow our public discourse to be dominated by fake news and half-truths? How can we begin to remedy things and stop it happening here? Here again, Brexit should be a lesson, because another thing the Brexit story has shown us is a brand of politics in which concern for people’s real well-being has gone out the window, the soundbite has become more important than the truth and people can groom a majority to act against its own welfare. In short, we now have a brand of politics and commentary that, all too frequently, misleads rather than leads.

“It is remarkable that a successful UK economy is determined to be divergent rather than convergent with its neighbouring countries in Europe. If we look a little more widely, we see it is not only Brexit. Our political arguments are becoming coarsened and are having knock-on effects on our behaviour. One sign is the trigger-finger readiness of so many people to play the immigration card, even the race card.

“Much of this is the result of fake news and the way in which what we used to call tall stories and gossip no longer goes from mouth to mouth but from one set of fingers to a million sets of eyes, with a tap on the keyboard.

“Brexit shows us how vulnerable we are in that regard. That is why the Commission is alerting member states to the dangers and advising them to set up an infrastructure that can counter what is happening.

“The respected Irish Independent editor-in-chief, Mr [Stephen] Rea, is making a sterling contribution to this work, having been appointed to the European Commission’s high level expert group examining the issue of fake news. Next year’s elections to the European Parliament gives this added significance and urgency. We must be on our guard.

“It is urgent that we find the way to reveal it for what it is, namely, political mischief and a wrecking ball.”

Read his address in full here

6 thoughts on “‘A Sterling Contribution’”