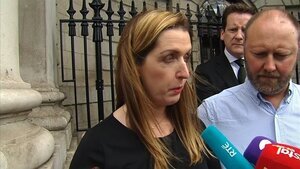 Vicky Phelan, her husband Jim and her solicitor Cian O’Caroll, in background

Mum-of-two Ms Phelan and mum-of-five Ms Mhic Mhathúna are both terminally ill with cervical cancer. They both only recently became aware that previous smear tests – before their cancer diagnosis – wrongly gave an all-clear result.

Mr O’Carroll’s interview followed a report by RTE this morning, by the station’s Washington Correspondent  Brian O’Donovan, based on a statement from the US laboratory which settled a High Court action taken by Ms Phelan over an incorrect smear test result.

Mr O’Donovan reported that Clinical Pathology Laboratories said what happened Ms Phelan and her family was tragic and that it deeply regrets the outcome.

Áine Lawlor: “Your two very brave clients who have been certainly touching the nation over the past couple of weeks with their honesty and their courage, Cian O’Carroll.”

Lawlor: “Interesting though today, you were quite critical of the apology to Vicky Phelan from the US lab CPL. Tell us why.”

O’Carroll: “Well, it’s an apology which I understand RTÉ received through the laboratory in the US today – three weeks after that trial began, five weeks after they attempted to gag her with a confidentiality clause as a pre-condition to any discussions regarding the resolution of her case, through mediation outside court.

“It also doesn’t deal with the conduct, their conduct of the defence the case which has, quite rightly, come in for so much criticism since then. So I think it is an unacceptably late and insincere apology.”

Lawlor: “What do you want to hear from Minister Harris this afternoon?”

O’Carroll: “Quite apart from the practical steps which he has alluded to already, we need to see a new team put in place. Obviously it’s going to be a new Chief Executive for the HSE but, beneath that, there needs to be a management team that is not tainted by the decision of the last six years.

“Because it’s over that six-year period that the senior management team, in the National Screening Service and in CervicalCheck, all agreed among themselves that not only should women not be informed of the vital information regarding their reviews and rechecks of their smears, but that no steps were taken to inquire into what was happening in the laboratories that was leading to such a significant level of misreporting of smears.

“That’s an entirely different issue. And it is contrary to what the National Cancer Control Programme told the minister last month in a memo, it is a patient safety incident and one which they refuse to acknowledge and investigate.”

O’Carroll: “That may be the case when it comes to true false negatives because there are other statistics here that come out of the laboratories and I presume they are analysing the results and obviously they’re comparing them with different laboratories. But I suspect, however, is there hasn’t been an open and honest analysis of the missed and incorrect reading of these smears.

“And I would be very, very surprised if it turns out that 209 significant under or delayed commencement of treatment for women is within an accepted norm internationally.” 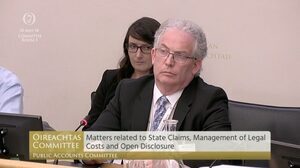 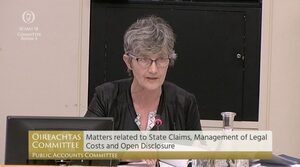 You have no concept of accountability – @catherinegalway

Memo’s without dates and signatures – this is the state of our governance.#CervicalCheck #Dail pic.twitter.com/atJAjWU6T4

Independent TD Catherine Connolly, who is a member of the Public Accounts Committee and was at the PAC meeting yesterday which was attended by outgoing HSE chief Tony O’Brien, also spoke to Ms Lawlor.

“When I appear in public – say at a Committee I conduct myself against a simple standard. Would I be happy for my children or my mother to see how I behave? I sometimes look across the room and hope their children will never see and hear how they behave.”

In relation to yesterday’s meeting – and the three memos which emerged at the meeting – Ms Connolly said:

“It was like pulling teeth. I don’t believe that I ever strayed from my brief, I simply asked questions and he confirmed that he was aware, he actually confirmed that he didn’t think there was anything to worry about, of concern, in one memo that he got.

“It turned out there were three memos and when we read those quickly, when we got them at 3pm, why it took until 3pm I don’t know, why he didn’t have them with him, is extraordinary, and the three memos are simply shocking.

“The first one, from March 2016, has simply ‘March’ on it, no specific date, it’s not signed. And it clearly is preoccupied with containing the message when eventually, eventually, down the road, the clinicians would see there way to telling the women and clearly containing that message.

“Now, and obviously, it’s been repeated a few times, pause all letters, don’t send them out, await legal advice and so on. And, as I read that, and thinking about it since, it’s clear to me, that they got advice, in relation, from a communications company which is a question I’ll be following up

“Because that’s exactly what jumps off the page.” 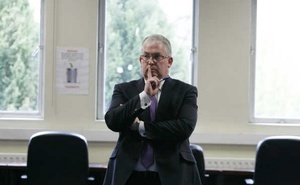 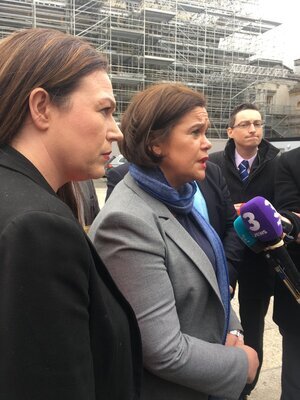 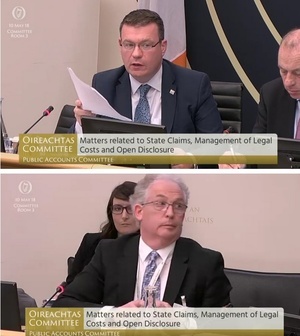 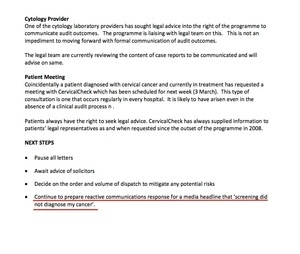