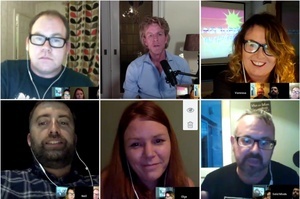 This is an emergency

In other news, Vanessa discussed her time at the Eighth Amendment Referendum campaign count in Dublin Castle while Olga, who spent her week at the same venue for the Disclosures Tribunal, brought us up to date on the alleged smearing of garda whistleblower Sgt Maurice McCabe.

Vanessa’s hair by Marco Diaz (him off the telly!) at The Salon.

Musician and DJ Kenny Tynan’s quest for cannabis oil has taken him from Spain to Leinster House. Johnny Keenan meets Kenny and wife Maire at their home outside Athlone.

Talking Outside The Box

The Chat Was Mighty

Chat On A Hot Tin Roof

12 thoughts on “Is There A Consultant Oncologist In The House?”