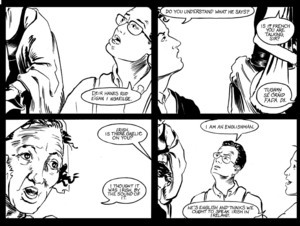 From the illustrated Ulysess by James Joyce

1 Denied the existence of the Irish language

“You see, the truth is there IS no Irish language. There was a bunch of dialects Dineen tried to turn into a language as a nationalist plot.”

2 Described the Irish language as gobbledygook

“The bilingual street signs in Dublin are just a bit of English and a bit of gobbledygook to most people.”

3 Stated that English is superior to Irish

4 Described the name Mac Gearailt as an “absurd Gaelic confection”

“Garret FitzGerald is clearly Anglo-Norman, no matter the absurd Gaelic confection that he occasionally translates his name into.”

“Somehow chanting pretentious gibberish is now considered to be cutting edge but it’s not and it never will be.”

“Even now there is a class bias within the Irish language. At many Irish language primary schools in Dublin the favoured form of transport is an expensive SUV”

“I had a real visceral dislike for Irish back then…It was the language of poverty and submission”.

“I am hurt by the reduction of Irish, the oldest spoken literary language in Europe, to phonetic translations from the relative newcomer, English. Who gains from the translation of ‘buggy store’ into ‘stóras bugaithe’? Anyone who wants to make fun of the Irish language, that’s who.”

“When there is no intrinsic word or phrase in a language for anything new to the world in the past hundred years or so, that language is not alive.”

10 Falsely claimed that the Irish language is dead

“Gaelscoils don’t exist most parts of the country. And where they do, their appeal seems to have little to do with Irish language. More to do with exclusively middle class (non working class, non immigrant) environment.”

“While I appreciate the language, I abhor the educational apartheid that goes along with it.”

“The department’s own audit showed few children with special needs in Irish-speaking schools – so are Irish-language schools weeding these children out?”

“I’d create inclusivity by abolishing exclusivity. No religion, no private schools and none of this nationalistic Irish language nonsense, which, as far as I’m concerned, is the ultimate barrier in the Irish education system”.

“The snobs (Na Snobi) are those who reckon that sending their kids to a gaelscoil is the only politically correct way to keep their kids away from the lower classes. (They are not wrong.)…Of course, sending your kids to a school where the parents must speak Irish could be seen by some as a form of racial segregation. Na Snobi are at pains to point out they are not racists.”

“Apart from its straightforward careerist aspects, among the things we did not hear about the gaeilge during Seachtain na Gaeilge was the sinister development whereby the ruling class are sending their children to the Gaelscoileanna in unprecedented numbers — south Dublin, the land of Ross O’Carroll-Kelly, is full of them.”

“In recent weeks Sinn Fein fielded candidates who came across like gaelscoil teachers, while in Belfast a senior republican was declaring that they still had access to their own army.”

“if you think there’s been some gross hypocrisy over the language thus far, just watch how dirty it gets when the Gaelgoiri and the ‘cultural republicans’ of post-terrorist Sinn Fein face the prospect of losing their precious shibboleth.”

“The guardians of ‘language rights’ as prescribed in the Official Languages Act have gone at the language like the Taliban went at Islam and left nothing except lumpen duty and legal threat.”

“But don’t hold your breath waiting for a quarter of a million language-Stakhonovites marching into the 2033 sunset, Gaelic spanners in hand, chanting Erse verse.”

“I’ve been writing about the futility of the state’s language-restoration programme almost my entire professional life, and the outcome has been threefold. One, vilification by brainless Gaeilgeoir skinheads, yawn. Two, the language is deader than ever. And three, the state money spent promoting this doomed language remorselessly rises.”

“It’s that time of year again, when schools try to tempt youngsters into signing up for a few weeks in one of the Gaeltacht’s vast network of concentration camps…sorry, summer camps.”

23 Compared the Irish language to the Islamic hijab head covering

“A cúpla bliain ó thinn I wrote that the Irish language was our equivalent of the hijab, the headscarf worn by orthodox Muslim women as a badge of identity and compliance, a figleaf to cover a web of unacknowledged weaknesses.”

“We pretend that Irish is our national language and lavish hundreds of millions a year on trying to revive what is a linguistic dodo.”

25 Compared an Irish-speaking football team to fundamentalists and Nazis

26 Wrote that “the Gael” is dishonest

“The one true function of the Irish language today is that it demonstrates the vastness of the dishonesty of the Gael, and the piety that is his calling card.”

27 Associated the Irish language with “mucksavagery”

“The Irish language’s unpopularity is rooted in the kind of mucksavagery with which it is surrounded. It has become the international language of cute hoorism, the babbling soundtrack to a world of strokes, chips on the shoulder and fast ones.”

“The school has set itself up as a kind of Finsbury Park Mosque by the sea.”

29 Associated Irish speakers with the sexual abuse of children

“The vast majority of us cannot hear that language being spoken, in any context, without also hearing some distant echo of physical and sexual and psychological abuse”

What’s The Irish For Domino?

148 thoughts on “I’ve Nothing Against Irish Speakers, But…”