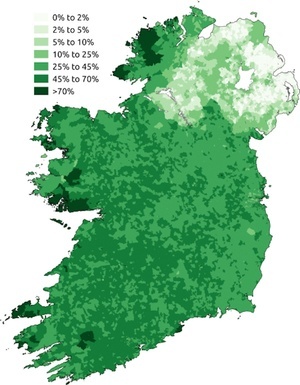 Colm Ó Broin, who last week compiled a rich example of prejudice in the national press about the Irish language, writes:

There are people in every society who are hostile to groups that are different to them. We are all familiar with prejudice against people of a different gender, sexuality, skin colour, nationality, ethnic background or religion.

But what about people who speak a different language? Usually bias against a language is classed as racism – for example, immigrants being verbally abused for speaking their native languages or chauvinists repressing the languages of minorities like Kurdish in Turkey.

We have our own version of this chauvinism here in Ireland – the hostility of British loyalists to the Irish language. One of the earliest examples are the Statutes of Kilkenny, which outlawed the speaking of Irish among the descendants of settlers from Britain.

These laws were enacted in 1366 but given the political nature of this hostility it’s more than likely it goes all the way back to 1169. The fear behind it was the belief that people would be less loyal to the English Crown if they spoke Irish – a fear still heard today in hysterical claims that the United Kingdom will be “undermined” if speakers of Irish Gaelic are given the same rights as speakers of Scottish Gaelic.

Which brings us to Gaeilgephobia – the irrational fear or hatred of the Irish language and those who speak it. You’ve probably never heard the term before and the concept has received little or no recognition in English-speaking Ireland, despite it being one of our oldest recorded prejudices.

While we can see the open hostility of Unionist politicians to the Irish language in Northern Ireland, many would find it hard to believe that there is prejudice against Irish speakers in the Republic of Ireland as well. Any negativity surrounding the language south of the border is supposedly related to government efforts to promote it, and not the language itself.

If you read the articles that the quotes used in my post are taken from you will indeed see legitimate arguments against official policies on the language – but scattered among them you will also see something entirely different – prejudiced attacks on the Irish language and Irish speakers.

One thing that’s striking is the GUBU nature of these statements, which would be worthy material for a Louis Theroux documentary.

In the bizarre corner we have the claim that no Irish word has been created in the past 100 years and the argument that Irish is comical in some way because it has taken words from other languages, something that practically every language on the planet does, none more so than English itself.

Then we have the comparison of Irish speakers with Nazis, skinheads, Communists and Islamic fundamentalists.

Among the worst is the comparison of a school in Dingle with the Finsbury Park Mosque, an establishment frequented by Islamist terrorists linked to Al Qaeda. The great crime committed by this school was to teach through the medium of Irish – in what is officially an Irish-speaking area.

Like other phobias Gaeligephobia has its own set of mantras that are repeated ad nauseum regardless of evidence, many of which are seen in the quotes.

One of the most common is the false claim that Irish is a “dead language”. The commentators who say this are fully aware that there are Irish-speaking communities in Ireland as well as thousands of fluent speakers in the rest of the country, so this is simply a crude attempt to insult Irish speakers.

After all, if Irish is a “dead language”, and you speak Irish, that means there is something “dead” about you and your community.

Opponents of Irish language education don’t have to send their children to Gaelscoileanna and are not affected in any way if other people make this choice. However, they still go out of their way to attack parents who choose Irish-medium education for their children.

But as they don’t have a rational reason for this opposition they have to resort to bogus pretexts. This is the most revealing attack on Irish as it relies on false claims, which is a sign of pure bias against the language.

Claims that the Irish language is somehow “middle class” are also very amusing for Irish speakers as for centuries we have been told that Irish was a “badge of poverty”.

This Orwellian doublethink will be familiar to other groups subjected to prejudice, like the immigrant who can scrounge on the dole while stealing your job at the same time.

Similarly, if a poor person speaks Irish it becomes a “peasant language”, but if a rich person speaks it it’s an “elitist language”. The object here is not to establish facts but to negatively stereotype the minority group using any means necessary.

Attacks on the Irish language began hundreds of years ago and the quotes highlighted last week show that they continue to this day.

Whatever the reason for this bizarre prejudice it’s time we consign it to the rubbish bin of history, where it belongs.

Previously: I’ve Nothing Against Irish Speakers, But…

This Is Not How We Remember Irish College 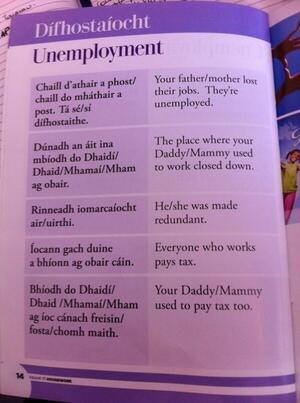 This Is Worse Than Peig

90 thoughts on “‘Elite Peasants’ And The Weird World Of Gaeilgephobia”