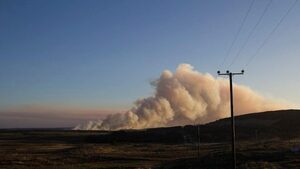 A fire at at Cloosh Valley, near Oughterard in Co Galway last year

The Department of Agriculture, Food and the Marine has today issued a Condition Red Forest Fire Danger Rating Notice in advance of further heatwave forecasts for the remainder of the week.

Condition Red is the highest level and is rare in Ireland.

The Department has also highlighted the current extreme danger to resources and public safety arising from vegetation fires, especially gorse, and particularly in proximity to heavily populated areas and on urban interfaces.

The Condition Red Notice replaces an Orange High Fire Risk Notice that has been in effect since last Thursday.

Under extreme Fire Risk Conditions any ignition may give rise to rapid and unpredictable wildfire development and spread, particularly in dead grasses, and low moisture shrub fuels like gorse and heather.

Upland fires can be expected to cover extensive areas and pose extreme difficulties to suppression efforts and may potentially give rise to Major Emergency scenarios.

ONE Heatwave Since Records Began