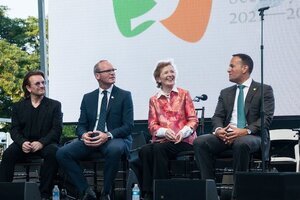 While their jaunt was ostensibly to “launch” Ireland’s bid for a seat on the UN Security Council, their real purpose was more domestic.

It was an impressive display.

In addition to these four government members, curiously all of them from Fine Gael, were a former Irish President, the Defence Forces’ Chief of Staff, Bono, U2, a contingent of uniformed Defence Force members and an even bigger contingent of Irish political correspondents.

If UN Security Council (UNSC) seats are allocated on the basis of display, then Ireland should be a shoo-in.

But, UNSC seats are not won by those who just put on the best display.

They are won by years of horse trading and deal making.

Ireland’s fortunes will owe more to who we have backed in past rounds than it will on enabling UN Ambassadors to see U2 live or even getting to meet Paul Kehoe or Ciaran Cannon and shake their hands.

Last week’s New York escapade was not for the benefit of the UN Ambassadors, it was for ours. It was, as I have discussed here previously, an example of the glitzy stage production that the Varadkar Production Co., T/A Fine Gael and the Irish Government Inc., likes to mount.

The real audience was not in New York, it was here. The campaign launched was not Ireland’s bid for the Security Council, it was Fine Gael’s bid to increase its Dáil representation.

So, how galling must it have been for the media pack, who obligingly helped bring the message to the good folks back home, to later hear that the Taoiseach was speaking so disobligingly about them behind their backs, channelling his inner Trump.

But the media will get over their indignation. They know that revenge is a dish best served cold and can pack their displeasure away on ice, to be served another day.

Meanwhile, Ireland is right to seek a seat on the Security Council for the two-year session commencing on Jan 1st 2021.

We are right to fight hard to win that place but, though you wouldn’t know it from last week’s hoopla, the decision to seek a UNSC seat was not made last week, or even last year it was made a decade or more ago.

The former secretary-general at the Department of Foreign Affairs and Irish ambassador to the United Nations, Noel Dorr, said so much during an interview on the RTÉ Six-One news. He thought the decision might date back to 2005 – two years before Varadkar even became a TD.

Ireland has a strong record in winning UNSC seats. We have sought and won a place on the Security Council approximately once every 20 years, since we joined the UN in 1955.

But that “if” is important. This is not the Late, Late Show, there isn’t one for everyone in the audience. More than 60 UN member states have never served on the Security Council.

The destination of the five UNSC seats for the 2021-2022 session, will be decided when the UN General assembly votes next June. They will be filled as follows:

• One for the Asia-Pacific Group

• One for Latin America and the Caribbean

• Two for the Western European and Others Group

The UNSC’s rotation rules determine that the non-permanent seats rotate among the various regional blocs into which UN member states are divided for voting and representation purposes.

Thus, Ireland is one of three countries competing for the two Western Europe and Others seats: the other two are Canada and Norway.

All three bidders are widely viewed as model UN members. Even so, Ireland is a strong contender. Just as we were in 2000 and 1980,

Back in 2000, we were against Norway and Italy. We emerged the clear winner, getting 130 votes. But Norway did well too, getting 114 votes compared to Italy’s 94.

In the earlier 1980 rotation the voting was tighter with Ireland coming second (with 107 votes) just behind Spain on 109 votes.

The current view of the UN watchers is that Ireland should make it this time.

Norway’s election is seen as a fait accompli not least because it “has a huge aid budget – probably the biggest in the world,” according to one official. So, the fight will be between Ireland and Canada – with Ireland having an advantage.

Many in the Canadian media view their own bid as the weakest of the three. They attribute this to their being the last candidate country out of the traps with Canada not commencing a bid process until after Trudeau became Premier in 2015.

So how do we extend our advantage?

Though some of the Merrion Street FG spin masters may believe that there is no better way of improving Ireland’s UNSC chances than having more photo-ops with the Taoiseach and Tánaiste, Fianna Fáil’s Jim O’Callaghan has come up with one.

O’Callaghan points to Ireland’s hard sell in reminding others that we are a country that complies with the highest standards of human rights as set down by United Nations conventions.

Back in November 2012 former Tánaiste, Éamon Gilmore told the Dáil that the Government would publish the legislation required to ratify OPCAT, namely the Inspection of Places of Detention, Bill the following year, ie., 2013.

Almost five years later there is no sign of it, though Justice Minister, Charlie Flanagan now says he will be ready to publish it later this year.

Hopefully he will, and we can tick another box in our UNSC campaign.

If not, then just imagine the size of the show that Varadkar & Co., will have to put on to distract from it. 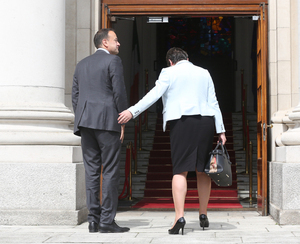 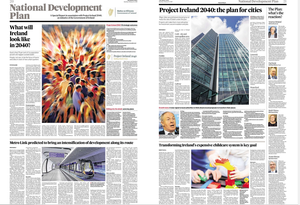