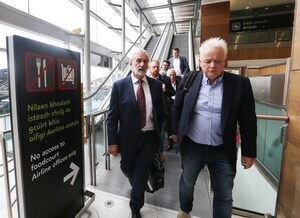 Agreement has been reached in talks between Ryanair and pilots’ union Fórsa, the trade union has said.

The agreement comes after a 22-hour session which began yesterday morning and ended at 7.30am today.

The proposed agreement will now be balloted by members with the union recommending that it is accepted.

Fórsa says it has been asked by talks facilitator Kieran Mulvey not to make any further comment while the ballot takes place.

6 thoughts on “Peace In Our Time”