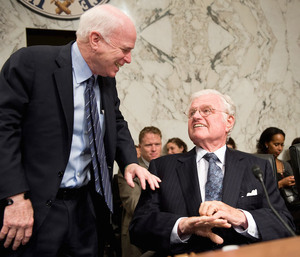 From top: US Republican Senator for Arizone, John McCain, who died at the weekend with Ted Kennedy, the late Democrat senator for Massachusetts, confide during a Senate hearing in 2009; Dan Boyle

In the black and white world of social media few participants seem to realise that it is possible, and that it should be necessary to disagree without having to impugn character.

There seems a similar lack of capacity when measuring the life achievement of a person.

No life is without error, yet in the bubble that is social media single individual error is often exaggerated and is taken to encapsulate who and what a person has become.

The nature of discourse, in particular political discourse, in these uncertain times seems to be that the more nasty, the more ignorant, and the less honest you can be, the better your political prospects become.

Trump has been has been the best, and most obvious, exemplar of this in recent times. His reaction to the death of John McCain shows how far his politics and US politics in general have fallen.

McCain death delivered a cascade of eulogies. Trump, as usual, stood aloof in his indifference, choosing to say nothing at all (which has been unusually disciplined of him).

Like Ireland, in the US political deaths are meant to carry with them a Marc Antony quality of mentioning only the good that is in men.

There would be many things that I would have found objectionable about the political positions and opinions of John McCain. He was a military and fiscal hawk, utterly wedded to a US interventionist view of the World.

There was also the question of his judgement which saw him select Sarah Palin as his Vice-Presidential running mate in 2008.

Although in his defence there is something of a tradition in US politics of choosing lightweight, risible candidates as running mates. It’s seen as something of an insurance policy.

And yet he was prepared to reach across the political divide (which is a relatively narrow divide in US politics) to seek and to reach accommodations.

Much was made of his friendship with Senator Edward Kennedy. During my time in Oireachtas a similar relationship existed between Michael McDowell of the PDs and Pat Rabbitte of Dem Left/Labour.

It’s hard to know whether such relationships are great beasts basking in each other’s egos, or are based on mutual respect.

Such is the cynicism now towards politics throughout the world, that for many the exhibiting of decency, civility or respect is a veneer that masks the everyday and ongoing corruption that many believe everyone in politics engages in.

It’s probably impossible to shift such a narrative, but in my experience whenever decency has been exhibited it has been real and sincere.

Therefore it is possible to believe in the innate decency of a person and be able to criticise any or every political position they hold.

Politics can be decent and it can certainly be principled. John McCain, however much I disagreed with his politics, seemed to possess that. Maybe he came to be seen as being virtuous when compared to Trump. Perhaps most of us would be seen as saintly if put into such a scenario.

It would be better if we could aspire to be more than Anti-Trump though.