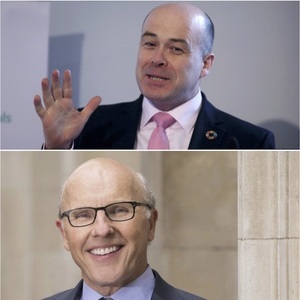 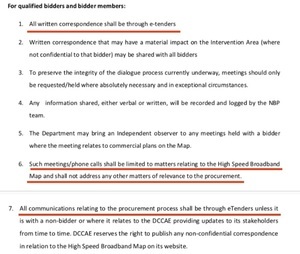 A copy of the National Broadband Plan (NBP) communication protocol obtained by The Times has prompted accusations that the exchange between Mr Naughten, his officials and Mr McCourt contravened rules set down to protect the integrity of the procurement process in areas relating to the handling of bidder queries and officials’ permission to discuss the plan.

Minutes of the dinner released last week showed that Mr McCourt raised issues relating to the bid’s leadership team, the importance of meeting an impending deadline, the need for the bid team to have finalised its financing arrangements, and its internal decision-making process.

Thread by @gavinsblog: “*Mulls yet another eNet thread* *sigh*. Ok a short one. And then a longer one. There’s so many moving parts to the eNet/MAN/NBP/Granahan McC […]” #justasking

Previously: McCourt In The Act

15 thoughts on “Breaking His Own Rules”