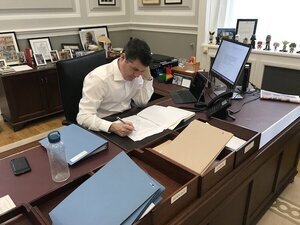 If you really, really want to know what is in today’s Budget and don’t want to wait until Paschal Donohue’s lunchtime statement, then I have great news for you.

You don’t have to wait.

About 70% of what the Finance Minister will say appeared on Martina Fitzgerald’s RTÉ #Budget2019 blog just before 10pm last night. This was updated just after 8.40am today, bringing the figure closer to 80%.

Between what appears on the RTE site and the various daily and Sunday newspapers most punters could predict with a fair degree of certainty about 90% of what Minister Donohue will announce today.

We already know that the hotel and restaurant sector have lost their fight to retain the special 9% VAT rate and will see it go up to 13.5%, indeed this new higher rate will also applied to hairdressers – if only I had not postponed my barber’s haircut until tomorrow.

We also know that Willie O’Dea’s campaign to get a €5 a week increase for pensioners, carers and other welfare recipients will have paid off and that the bands for the 2% rate of USC will be widened by €500 and the threshold at which you pay the higher rate of income tax will be increased by €750 and that cigarettes will go up by 50c a packet.

I could go on, but you get the picture.

For most of us today’s statement will contain nothing new, but thanks to almost a week of “informed” and “well sourced” speculation we are already familiar with what the government plans to do and how we each will benefit from it.

The closest thing to a budget drinking game we could devise today is to take a swig of the beverage of your choice any time you hear the Minister announce something that hasn’t appeared in at least two newspapers and one TV news report since last Friday.

The things we know are not due to “leaks”. Leaks are, by definition, the unauthorised revelation of confidential information and the reason they are unauthorised is because they are invariably negative by their nature.

Leaks involve the things that ministers prefer that you not know, or at least not yet know until they have had the time to either prepare you for the news or take some action that lessens the impact.

The difference is authorisation and approval.

Governments toady do not “leak” good news, they brief it. As the private secretary character, Bernard Woolley, explains in “Yes Minister”:

“That’s one of those irregular verbs, isn’t it? I give confidential briefings. You leak. He has been charged under section 2a of the Official Secrets Act.”

How very different from the situation back in 1995 when the then Junior Finance Minister, Phil Hogan, had to resign as a minister for revealing budget information.

The opposition was enraged and complained at the revelation of key elements of the budget to the media in the days leading up to the 1995 budget.

For context, recall that this was the first budget of the newly formed Fine Gael, Labour, Democratic Left administration – a government that came to office after the November 1994 collapse of Albert Reynolds short lived Fianna Fáil/Labour government.

Hogan’s boss as Finance Minister was Labour’s Ruairí Quinn. This was going to be Quinn’s first budget and Labour was determined that the credit for the goodies they were about to give away would be theirs alone, not Fine Gael’s. (Spoiler alert, it didn’t work out that way in 1997, but hey ho)

Shortly after the Budget was announced it emerged that one of the staff in Hogan’s office had faxed some of the details concerning planned changes to stamp duty to the media about four hours before Quinn went in to the Dáil.

The opposition went into a frenzy, with both Mary Harney and Bertie Ahern, who had been Finance minister up to few months before the ’95 budget and was himself responsible for some of what it contained, demanding satisfaction.

But the real pressure came from within the government where Labour ministers were furious that Fine Gael was trying to steal their thunder.

For days before hand the two parties are been outdoing each other with their briefings of not just what was to be announced, but how their party was solely responsible for it.

Hogan was just the one to get nabbed – sending it by fax with a cover sheet showing the time and the sender was not a good move.

The Taoiseach attempted to standby Hogan and sought to diffuse the situation with a profuse apology to the Dáil, but that was not enough. A few hours later Hogan decided that his position was untenable and resigned.

While the information that Hogan’s office had revealed was market sensitive and its early disclosure might commercially benefit people who learned of the change before it was officially announced, the reality is that it was the politics of the situation that necessitated his resignation.

Hogan’s office was revealing something to the media that it clearly did not have the authority to reveal.

It is not a situation we should expect to see repeated today. Times have changed considerably since then. While we retain the all the theatre and drama of the day, the performance itself is nowhere near as impactful as it once was.

Some theatrical productions simply run their course. Even record-breaking ones close.

The way budgetary decisions are made and the external factors against which they play out have all changed enormously, so is it not time that the way in which they are announced change too?